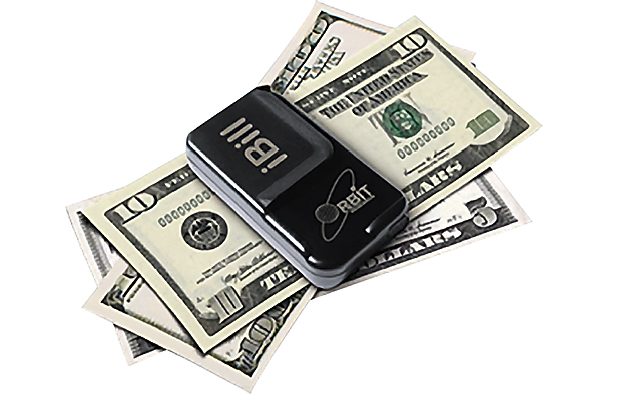 The iBill is a hand-held currency reader that the Bureau of Engraving and Printing is providing free to eligible blind and visually impaired individuals.

The Bureau of Engraving and Printing has begun distributing currency reader devices to blind and visually impaired individuals.

Eligible attendees at the July 1 to 6 National Federation of the Blind convention in Orlando, Fla., were the first to receive the iBill Talking Money Identifier device, which was developed by Orbit Research in Wilmington, Del.

The devices can “read” denominations of paper money and provide the information in the form of speech, a tone or by vibration.

The distribution of the currency reader devices is in compliance with a May 2011 decision by then Treasury Secretary Timothy F. Geithner to provide accessibility to U.S. paper currency for those who are blind or otherwise visually impaired.

The accommodations authorized by Geithner meet the requirements of a May 2008 United States Court of Appeals for the District of Columbia Circuit decision in a lawsuit filed in 2002.

BEP will launch a four-month pilot program on Sept. 2, 2014, to distribute the devices at no cost to eligible blind or visually impaired persons through a partnership with the Library of Congress National Library Service for the Blind and Physically Handicapped.

The service administers a free library program that circulates Braille and audio materials to approximately 400,000 eligible borrowers in the United States.

Beginning Jan. 2, 2015, the devices will be widely available to all U.S. citizens or persons legally residing in the United States who are blind or visually impaired.

Individuals who are not Library of Congress National Library Service patrons must submit an application.