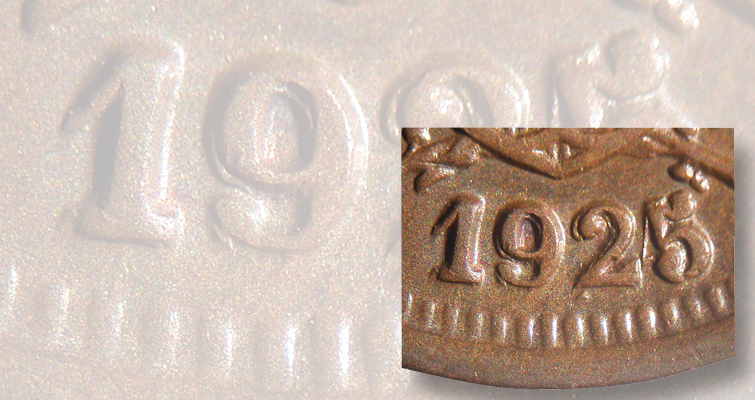 In this overdate variety, an attenuated numeral 4 peeks out from beneath the last digit of this 1925 Switzerland 1-rappen piece. 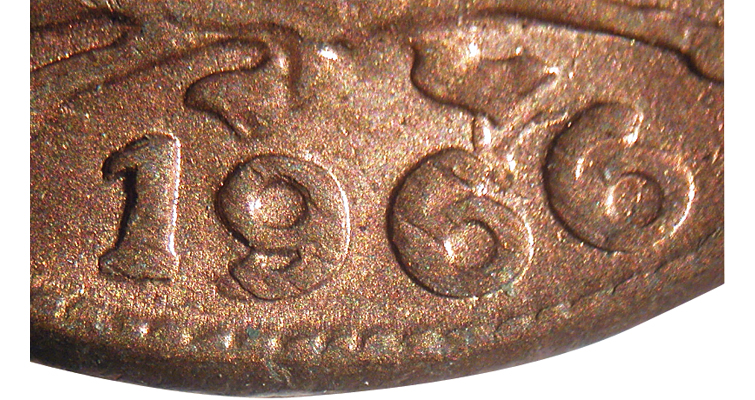 A wildly misplaced numeral 6 lurks between the wreath and the last two digits on this 1966 Colombia 1-centavo coin. A second and unidentified element can be seen beneath the 9. 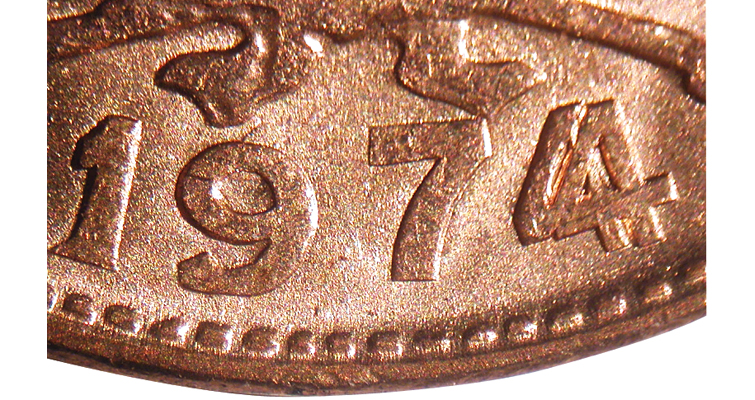 This 1974 Colombia 5-centavo coin shows a repunched 4 in which both numerals are equally strong. Both the 7 and the twin 4s are positioned slightly northward of the first two digits. 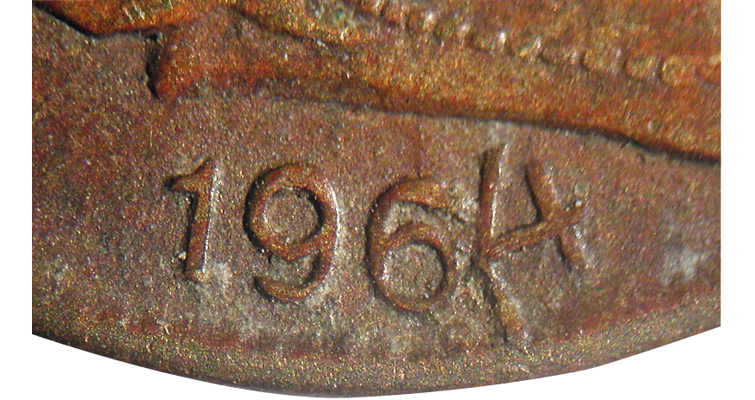 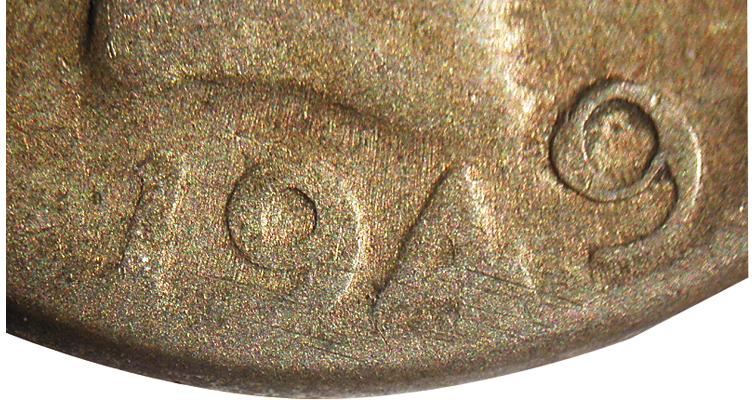 A stylistic discrepancy exists between the first three digits and the last digit on this 1949 Colombia 10-centavo coin.
Previous
Next

Most countries change the dates on their coins every year. This update can be accomplished in several ways, depending on whether the date originates partly or wholly on the master hub, the master die, or the working die. The method most fraught with human error involves punching some or all of the digits into each working die by hand.

Die varieties arising from this method include (but are not limited to) malpositioned numerals, repunched numerals, overdates, and mismatched styles.

Our first ham-handed numerical update is found on a 1964 Peru 5-centavo coin. The last digit is rotated in a counterclockwise direction and shifted northward. Online images of other 1964 5-centavo coins show the last digit malpositioned in slightly different ways, evidence that it was punched into each working die by hand.

A 1949 Colombia 10-centavo piece features a final digit with different style. It is larger, thinner, and higher in relief than the adjacent numerals. Online images of other 1949 Colombia 10-centavo coins show the same stylistic discrepancy. The position of the last digit varies slightly between individual coins, again suggesting that the last digit was punched into each working die by hand.

Bungled dates go into overdrive on Colombian 1-centavo coins minted in the 1960s and early 1970s. In fact it’s hard to find a 1-centavo coin that doesn’t have a repunched date or an overdate. Similar die varieties are found on higher denominations with less frequency.

Any digit may show some effect, indicating that the entire date was punched into each working die by hand. Shown is a 1966 1-centavo coin with the last 6 wildly repunched. As is true of most repunched dates, the malpositioned numeral is much weaker, thinner, and lower in relief than its properly positioned counterparts, indicating that the initial impact of the letter punch was weak.

A 1974 Colombia 5-centavo coin shows the less common phenomenon of a repunched numeral in which both digits are equally strong. Both the 7 and the twin 4s are positioned slightly northward of the first two digits.

Some mispunched dates are created out of expedience. A looming production deadline, a broken hubbing press, or a shortage of blank working dies invites shortcuts. One could potentially retrieve an old surplus die, grind out part or all of last year’s date and punch in the current date. Incomplete erasure of the old date will result in an overdate once the new date is punched in.

Shown here is a 1925 Switzerland 1-rappen coin with a 1925/1924 overdate. The last three digits show repunching, indicating that all four digits were punched in by hand. What many would interpret as an incomplete erasure of the original date has left a thin remnant of the 4 beneath the 5.

Common assumptions about overdates may be wrong.

Strong-over-weak overdates like this present us with a long-standing puzzle. If the earlier digits were partially erased by grinding into the die face, then one would expect the surrounding field on the coin to be elevated. After all, the field portion of the die is being removed down to the lowest levels of the number recesses, where they are narrowest. In the case of the relatively high-relief date on our Swiss coin, the resulting basin would have been quite deep. But I’ve never found the field to be swollen in this or any other overdate. A wider field of abrasion would leave a larger basin with a shallower slope that’s harder to detect. But then, nearby elements would be thinned, lowered, or entirely lost in low-relief areas, and we just don’t see this.

It’s equally clear that the earlier date isn’t being ground off the working hub because that would preserve the original width of the digits while lowering their relief on the coin.

It’s possible that the underlying numerals were never strongly punched-in in the first place. In his discussion of overdates in The Authoritative Reference on Liberty Seated Half Dimes (2014), Kevin Flynn suggests that the entire face of the old die was ground down. After that, the die was annealed (heat-softened), re-hubbed to restore the design, and then a new date punched in.

I should note that the same conundrum is found in strong-over-weak over Mint marks, where a different Mint mark is superimposed over an older, attenuated Mint mark (think domestic D/S varieties). No mound is ever seen in the area allegedly excavated over the old Mint mark location. 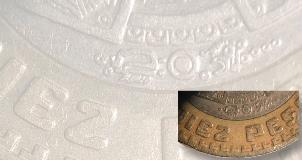