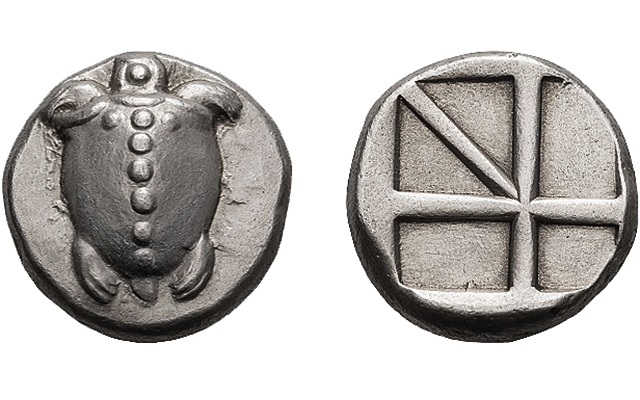 This silver stater from Greek island Aegina dates from 480 to 446 B.C.E. It depicts a sea turtle in high relief and is of exceptional quality.

Lots 76 to 78 are described collectively in the catalog as “Three Incredible Sea Turtles” and the three pieces from Aegina date from 480 to 446 B.C.E.  Aegina is a small island, midway between Attica and the Peloponnese. It was situated on a key trade route and Aegina sea turtle coins were popular trade coins in the ancient Greek world.

The obverse typically features a sea turtle with the ridge of the shell ornamented with a row of dots, along with one dot on each side of the head. The reverse features an incuse (sunken) design.

Lot 76 is an exceptionally fine example and carries a price of $7,500.

The description adds, “Struck in high relief, this sea turtle has fantastic detail, fully struck dots on the turtle’s back as well as claws on his flippers. The eye in the head is very sharp, tip of the beak is off flan. Quality like this has virtually never been seen for sale in many decades. Mint State.”  Lots 77 and 78 each are priced at $7,000.

Harlan J. Berk's buy or bid sales allow customers to either buy the coin at the price listed immediately or place a bid at a lower price.  The sale closes May 29, 2014.  Visit Berk's website or phone the firm at 312-609-0018 for more information.