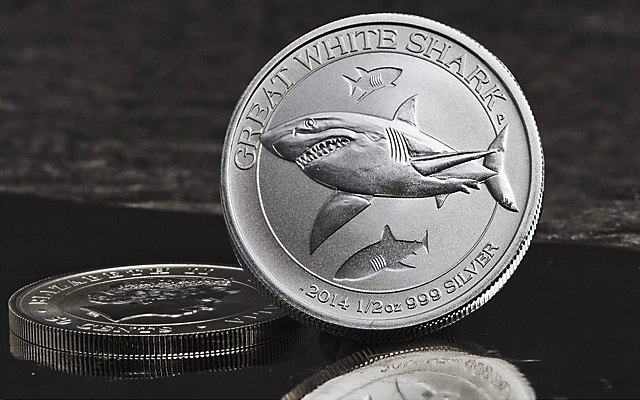 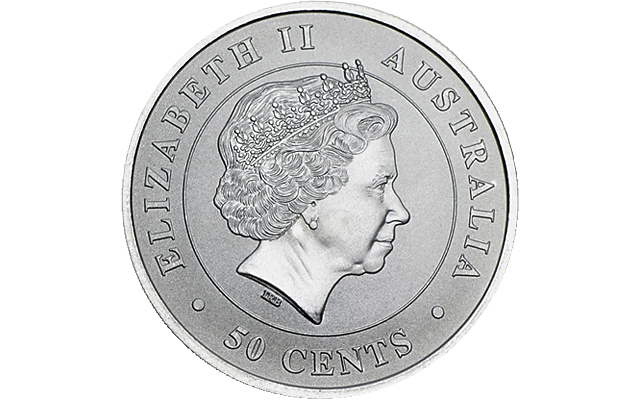 Ian Rank-Broadley’s effigy of Queen Elizabeth II appears on the obverse of the new coin. 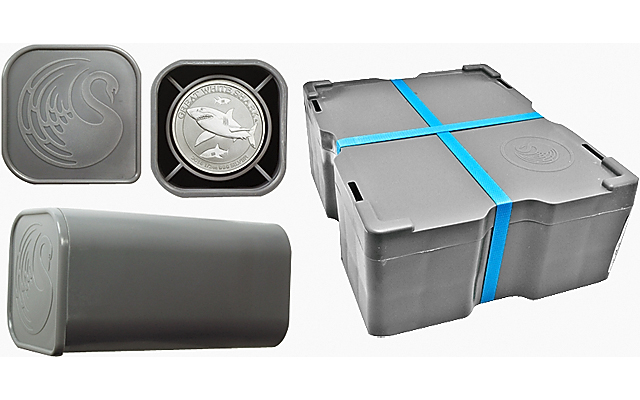 The Great White Shark silver 50-cent coin is available in 25-count tubes, left, or in a 500-count monster box, right.

The Brilliant Uncirculated coin, struck by the Perth Mint, is being issued exclusively through American Precious Metals Exchange and has a maximum mintage of 300,000 pieces.

Unlike many custom minted, exclusive bullion pieces struck by the Perth Mint or the Royal Canadian Mint, the Great White Shark coins are available individually, with no minimum purchase required.

Great White Sharks grow to an average of 15 feet in length and weigh around 5,000 pounds. Their torpedo-shaped bodies and powerful tails can propel them through the water at speeds of up to 35 miles per hour.

The great white got its scientific name, Carcharodon carcharias, from the Greek words karcharos, meaning sharp, and odous, meaning tooth.

Great whites have an estimated lifespan of roughly 70 years. Like all other sharks, the great white has electroreceptors called Ampullae of Lorenzini, enabling this fish to detect electromagnetic changes caused by the movement of a living creature, even a heartbeat if close enough.

The coin’s reverse designer, Natasha Muhl, said, “The Great White Shark is probably the most feared and interesting predator in existence. Anyone who’s seen the movie Jaws can imagine the terror of an encounter with this deadly creature.”

A large depiction of the shark dominates the reverse design of the new coin. Outlines of two other sharks fill out the design field, while inscriptions GREAT WHITE SHARK, the weight and fineness of the metal, and Perth Mint’s "P" Mint mark complete the reverse.

The Ian Rank-Broadley effigy of Queen Elizabeth II and the monetary denomination 50 CENTS are on the obverse.

The coins measure 32 millimeters in diameter and are sold individually, in “MintDirect” tubes of 25 coins, and in “monster boxes” of 20 rolls of 25 coins, for a total of 500 coins.

At press time, examples of the coin were available for prices starting at $12.99, with discounts based on quantity purchased and payment method.

That reflects a price about 33 percent higher than the metal value, which is comparable with other limited mintage, exclusive bullion coins from the Perth Mint and the Royal Canadian Mint (and actually less per coin than the Perth Mint’s Koala half-ounce silver 50-cent coin, which is struck in a slightly larger, 36.6-millimeter-diameter size).

For more information, or to order, visit a special page on the APMEX website or telephone APMEX toll free at 800-375-9006.