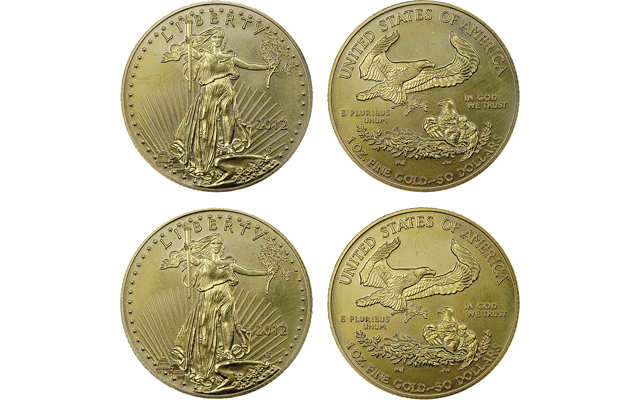 Fake 2012 1-ounce gold $50 American Eagle bullion coins submitted to NGC are missing serifs on the 2s in the date. Liberty's hair and face are poorly defined and the color is off.

According to NGC, on both counterfeits, details are "exceptionally flat" and the face and hair of Liberty on the obverse are poorly defince. Recessed horizontal lines appear through Liberty's legs, the result of low striking pressure used in manufacturing the pieces, according to NGC.

The letters of the legends and the numerals are of the wrong style. On a genuine 2012 American Eagle 1-ounce gold bullion coin, the 2s in the date exhibit small serifs, but on the counterfeits, the digits appear sans serif.

The color is also off for the counterfeits, which appear more greenish in hue than gold.

While NGC graders believe the counterfeits were struck on planchets having a composition other than gold alloy, the grading service did not conduct further analysis after examination of the design prompted the conclusion the two pieces were fake.

Max Spiegel, vice president of sales and marketing for NGC's parent, Certified Collectibles Group, said when the pieces were identified as counterfeit, they were returned to the submitter.

Spiegel said NGC has two programs for submitters of large quantities of modern bullion coins, and he provided the following information:

"NGC offers its bulk submitters an Authenticated Bullion program for modern coins. Coins certified under the Authentication Bullion program are guaranteed to have the stated precious metal content. The fees are lower to make this a more attractive option for bullion coins. Here's a link to more information: http://www.ngccoin.com/specialty-services/bullion/.

"We also offer a Certified Roll program for American Silver Eagles that has become quite popular. These coins are guaranteed authentic and the fee per coin is also lower to make this an economical option. We offer this to our bulk submitters as well. Here's a link: http://www.ngccoin.com/coin-grading/holders/certified-coin-rolls.aspx."