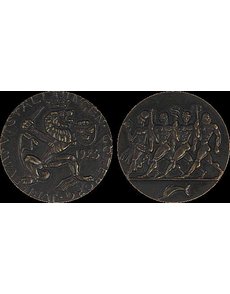 The 1923 medal for the Jubilee of the Swedish port city of Göteborg represents the whimsical work of Swedish sculptor Carl Milles, who came to the United States in 1931 as an artist-in-residence for a Bloomfield Hills, Mich., school.

During his busy life, he planned a career as a gymnastic instructor in Chile but was diverted into a nine-year stay in Paris, studying art and working in the studio of the great Auguste Rodin.

Enriched by this experience and establishing his own artistic reputation, Milles and his wife, Olga, moved in 1904 to Munich, then a great arts center.

The couple returned to Sweden in 1906, buying a site on the cliffs of the island of Lidingö that became famous as Millesgarden, later a nonprofit art foundation and a gift to the Swedish people. By the mid-1920s, Milles’ fame brought him an official invitation from the Irish government to take part in the design contest for the new coinage of the Irish Free State.

In 1931, George Gough Booth brought Milles to America as an artist-in-residence at the Cranbrook Educational Community in Bloomfield Hills, Mich.

Milles’ years in America were highly productive, and his monumental sculptures included Wedding of the Waters at St. Louis and the Hand of God in Detroit. The latter was erected with contributions from the United Auto Workers in honor of Frank Murphy, city mayor, Michigan governor and high commissioner to the Philippines.

All Milles sculptures are highly desirable, but few are accessible to the art market, increasing collector pressure on his medals. These are wonderful examples of the Swedish sculptor’s inimitable, humorous and occasionally irreverent style.

One of the better known Milles efforts hails the 400th anniversary of King Gustav I Vasa in 1923, with its typically rugged bust right with massive beard and the three crowns of the national arms.

In more whimsical style is Milles’ medal for the 1923 jubilee of the great port city of Göteborg, Sweden’s second city in size and importance.

The medal’s obverse shows a crowned, sword-wielding rampant lion holding the Swedish shield within a commemorative inscription. The reverse is a tribute to the city’s role in education, industry, commerce and seafaring.

Marching resolutely to the left are figures of helmeted Minerva reading a book, the god Vulcan holding a gear, commerce god Mercury with winged helmet and caduceus, and bearded sea god Neptune with trident. All the nude male figures show typically exaggerated musculature, but Neptune lightens the tone with his rather impudent grin. Below is a playful dolphin.

This deep glossy brown medal bears the edgemark of the noted Swedish medal firm C.C. SPORRONG & CO. It is a scarce and elusive, playful and satisfying design.