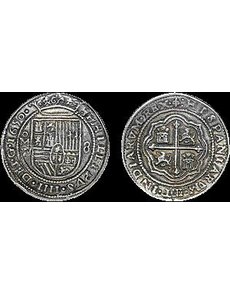 Graded Extremely Fine 45 by Numismatic Guaranty Corp., the silver 1650 8-real coin, Lot 4314, was struck in Mexico City. The Goldberg auction catalog describes the coin as an “Exceptional strike on choice metal. Perfectly centered, on quite round flan. Handsome gray toning, a deep gold and russet in the recesses.”

Royal coinage of this type is cataloged as Krause-Mishler R45 in the Standard Catalog of World Coins, 1601-1700, where it is described as being “struck on specially prepared round planchets using well centered dies in excellent condition to prove the quality of the minting to the Viceroy or even to the King.”

The coin will appear in the Session 7, World Crowns & Minors, World Currency portion of the firm’s Pre-Long Beach auction, with live bidding for the session slated to begin on Wednesday, Sept. 5 at 9:00 a.m. Pacific Time at the Goldberg offices, 11400 W. Olympic Blvd., Suite 800, Los Angeles, CA 90064.

Other items of notable interest in the auction include:

For further information on this sale, including how to bid by telephone, fax, mail, email or via the Internet, visit the firm’s website at www.goldbergcoins.com, telephone the company at 310-551-2646 or call Goldbergs toll free at 800-978-2646. ¦