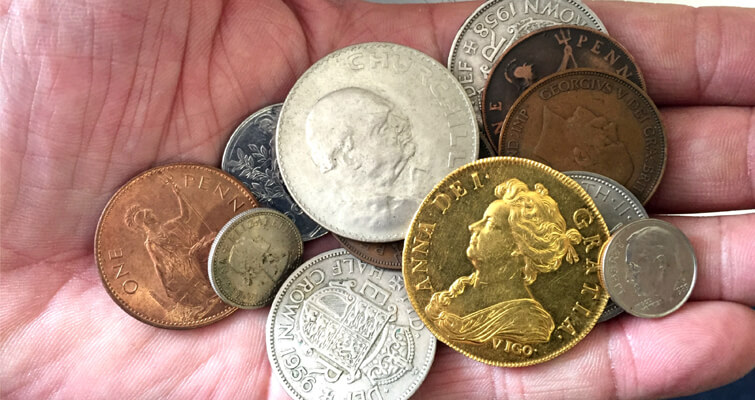 It’s not difficult to spot the British Queen Anne “Vigo” 5-guinea gold coin that is expected to bring £200,000 to £250,000 at auction after it was found among the coins in a child’s “pirate treasure” toy chest.

From an 18th century Spanish treasure ship, to a 20th century child’s toy chest — sometimes a rare coin’s journey can be humbling.

Boningtons Fine Art Auctioneers announced Oct. 23 that it will be offering a British Queen Anne “Vigo” gold 5-guinea coin struck from gold seized by the British from a Spanish fleet in Vigo Bay on Oct. 23, 1702, exactly 314 years before the Boningtons announcement.

Perhaps more fascinating than the coin itself, which is expected to bring £200,000 to £250,000 at auction, is where its current owner found it — in one of his old toy chests.

“My grandad had travelled all over the world during his working life and had collected many coins from the various countries he had been,” the coin’s owner told Boningtons. “He gave me bags of coins to play with — I was into pirate treasure — throughout my early years.

“As time passed these coins went back into bags and boxes and were forgotten about until I re-discovered them after my grandad passed away. I looked back through the coins — remembering the stories I made up about them when I was small — and then gave them to my own son to play with and put into his own treasure box. My little boy has been playing with this coin as I did all those years ago.”

Essex-based Boningtons is scheduled to auction the coin on Nov. 16.

Finding treasure among grandfather’s gifts, in a toy box in Great Britain: For the second time in four years, non­collectors have located a 1703 Vigo Bay gold 5-guinea coin in the inherited belongings of their families,