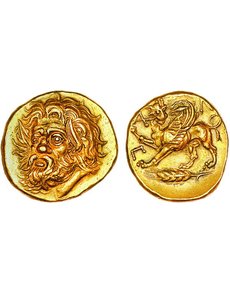 The auction is one of four being conducted by the firm in conjunction with Coinex, the annual large coin show in the United Kingdom.

The gold stater tops a group of 28 lots that together form “a fine group of Greek and Roman coins from the cabinet of a connoisseur.”

Struck circa 370 to 355 B.C., the coin features “magnificent late classical style” and “is by a master die engraver,” according to DNW.

According to the catalog, “Pantikapaion gold staters are among the most splendid and desirable of all Greek gold coins, depicting the head of Pan, an obvious pun on the city’s name, and a griffin, the fabled guardian of the gold mines of the Scythians, standing on a stalk of wheat, the main export of the region.”