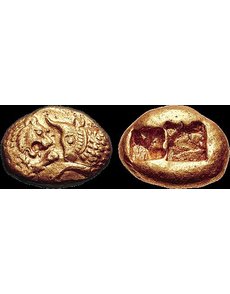 A circa 550 B.C. gold stater issued under the famed Greek king Kroisos realized $177,000 Jan. 4 in one of Classical Numismatic Group’s auctions in New York City.

The prototype issue, struck to a heavy standard at the Sardes Mint, is in Extremely Fine condition and is “among the finest known,” according to CNG, which conducted the Triton XV auction in two catalogs across four sessions, which combined realized $8,681,189 with the buyer’s fee.

Lots totaling 1,947 from 1,973 offered, or 98.7 percent, were sold in the portion of the auction offered in the second catalog.

Results of the other Triton XV catalog and the Cabinet W Collection may be found at www.coinworld.com.

All successful bids were subject to an 18 percent buyer’s fee, with a discount to 15 percent for certain payment and bidding methods.

Virtual catalogs may be viewed at the firm’s website, www.cngcoins.com, and are accessible through www.sixbid.com. Printed catalogs may be ordered from the firm for a fee.

Roman Republic, the Triumvirs, Mark Antony and Mark Antony Junior, spring to summer 34 B.C. gold aureus, 7.97 grams, “only the 11th known specimen,” “scattered bumps and bruises, including some light edge marks from a prior mounting,” VF, $41,300.

Byzantine, Nicephorus III Botaniantes, 1078 to 1081 silver bulla of 2 solidi, 8.86 grams, “extremely rare and enigmatic type, with only one other published example of this weight class,” “some minor roughness,” VF, $94,400.