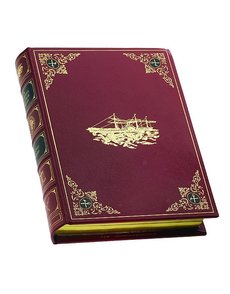 Our topic is the “gold standard” for literature/numismatic hybrids: Q. David Bowers’ A California Gold Rush History, which contains a packet of California gold dust salvaged from the SS Central America.

In September 1857, the steamship Central America left Panama laden with passengers and a cargo of gold dust, nuggets, ingots and coins worth $1,595,497 (hundreds of millions in today’s dollars). By Sept. 10, the sidewheel steamer was off the coast of North Carolina, where it encountered an “equinoctial storm” — a hurricane.

Despite heroic efforts, water overtook the boilers, and the powerless ship was battered by towering seas. Capt. William Herndon organized the orderly transfer of the women and children to rescue vessels that pulled near. When the Central America went down on Sept. 12, 149 of the 587 people aboard were saved. Capt. Herndon went down with the ship. Something else sank with the Central America, for several New York banks, deprived of the gold, became insolvent, thus precipitating the financial Panic of 1857.

In early 1987, an expedition funded by the Columbus-America Discovery Group, led by Tommy Thompson and Bob Evans, used advanced search theory and sonar technology to find the wreck 180 miles off the coast, under 8,500 feet of water. Thompson led the team that recovered the gold from the seafloor, using a submersible robot called Nemo, which retrieved the gold without scratching a coin. Evans, a scientist, led the team that removed marine encrustations and immersion discolorations.

By 1990, most of the gold was recovered, but legal wrangling over ownership continued. Finally, the Discovery Group was awarded 92 percent of the salvaged treasure; the other 8 percent went to insurance companies that had paid claims in 1857. By 2000, the Discovery Group sold its interests to the California Gold Group, managed by Dwight Manley, which marketed the gold to the public.

Manley commissioned America’s greatest numismatic scholar, Q. David Bowers, to write the definitive record of the find. Bowers’ budget for the book: unlimited. His achievement: priceless. A California Gold Rush History is the undisputed heavyweight champion of numismatic literature: 10.5 inches wide by 13.5 inches high; 1,055 pages long; and weighing a whopping 11 pounds. Bowers provides a comprehensive history of the entire California Gold Rush, including hundreds of contemporary illustrations. The story of the Central America is told in detail, and a complete listing (including photographs) is provided for every salvaged gold ingot.

The regular edition of the book is highly collectible, but the special edition, printed only for purchasers of ingots, is literally golden. Bound in sumptuous full red morocco leather, embellished with gilt vignettes of mining tools and of the Central America, housed in a leather-backed slipcase, it is a work of art. The inside front cover reproduces a large engraving of a mining scene, and inside a miner’s pan, under a mylar window, is a pinch of the actual 1857 gold dust recovered from the wreck.

You can buy this book, but not inexpensively. On Jan, 7, 2010, a copy sold at a Heritage auction for $2,415. The book is destined to be the centerpiece of any numismatic library, especially one that is — literally — sprinkled with historic gold dust.