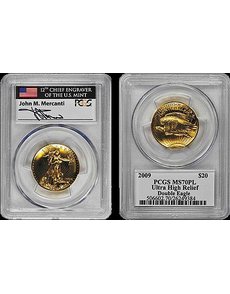 Perhaps the most coveted 2009 $20 Saint-Gaudens, Ultra High Relief coins on the market are MS-70 Prooflike examples with inserts signed by John Mercanti. This one realized $5,503 in an online auction that closed Aug. 28.

The rare coin market has welcomed a modest jump in the prices of gold and silver over the past several weeks after what’s been a rather slow summer for the precious metal markets.

Gold, which spent the better part of July hovering around the $1,600 an ounce level, jumped to the $1,675 level in the last week of August. Silver spent most of July and August at the $27 to $28 an ounce level, approaching the $31 level by the end of the month.

The market has thinned during the past several months for at least one popular precious metal issue. The 2009 Saint-Gaudens, Ultra High Relief $20 coin has seen a decline in price over the past month.

At the end of July these same coins were selling at the $3,000 level.

2009 Ultra High Relief coins with Prooflike designations continue to sell for premiums, with the most expensive examples being those graded MS-70 Prooflike, housed in PCGS holders with a special label signed by John M. Mercanti, the former chief engraver of the U.S. Mint.

The long-term demand for 2009 Ultra High Relief coins is nearly certain, provided that the 2009 coins remain a unique one-year issue and the concept is not duplicated for later issues.