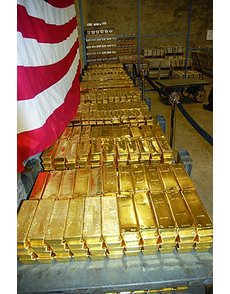 The price of gold has fallen sharply in recent weeks, to less than $1,300 an ounce at one point.

Gold, which enjoyed a spectacular run-up in price over the past decade, appears to have lost its luster to many investors.

One has to go back to September 2010 as well to find silver trading at the $20 an ounce level.

The drop in precious metals — which was accompanied by a drop in global stock markets — was interpreted as a response to comments from U.S. Federal Reserve chairman Ben Bernanke that the Federal Reserve may be done with its monetary stimulus next year.

From August 1999 to August 2011, gold surged in price 650 percent. An April 2011 Gallup poll showed that 34 percent of Americans thought that gold was the best long-term investment. However, as investors become more optimistic about the economy and fears about inflation become less prevalent, gold loses much of its allure as a safe haven investment.

The latest sharp drop follows a $140 an ounce slide on April 15 where gold hit a then two-year low of $1,350 an ounce. That led major analysts to declare that the golden age of gold was over and an April 10 article in the New York Times stated, “The stakes are high: the last time the metal went through a patch like this, in the 1980s, its price took 30 years to recover.” ¦