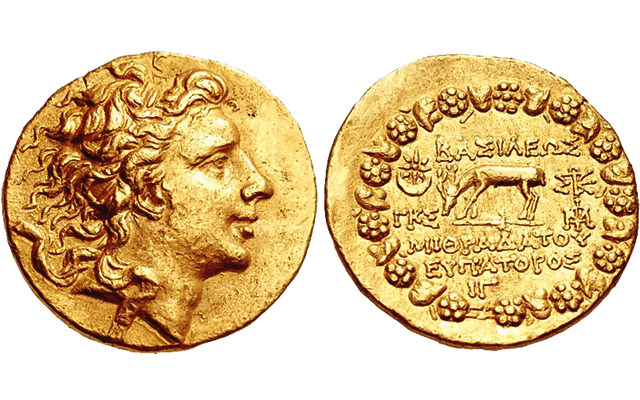 A rare gold stater from Persia, issued in September to October 74 B.C., realized a hammer price of $30,000, three times its estimate, in an auction that closed May 14.

A circa September to October 74 B.C. gold stater issued by a Persian king realized a $30,000 hammer price, three times its estimate, in Classical Numismatic Group’s Auction No. 96.

The auction closed May 14. The buyer’s fee ranges from 17.5 to 20 percent, depending on bidding method.

The coin, issued by King of Pontos, Mithradates VI Eupator, and struck at the Pergamon Mint, is one of two examples known of the ruler's last stater issue. The coin was likely issued during preparations for the Third Mithradatic War, which pitted the Persian king against Rome after the establishment of a new Roman province of Bithynia (located along the Black Sea in modern Turkey) when Nikomedes IV of Bithynia died and bequeathed his kingdom to Rome.

“Mithradates, of course, had desired the kingdom and bristled at the thought of having his enemy, Rome, form a new province on his border,” according to the catalog.

The coin is graded Very Fine, according to the catalog, with scattered light marks and abrasions.

It shows a diademed head facing right on the obverse, and a stag grazing on the reverse.