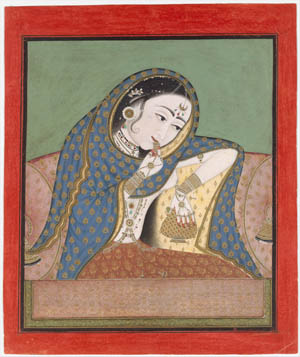 Gold jewelry has long held an important place in India’s culture. This painting from around 1750 depicts an Indian woman wearing substantial gold jewelry including bracelets, along with neck, hand and forehead adornments. Image courtesy Metropolitan Museum of Art.

An April 14 report on National Public Radio by Julie McCarthy illuminated a phenomenon that is often described but rarely humanized: India’s obsession with gold.

Although China may have out purchased India in 2013 to become the world’s top gold consumer — the two countries together contributed more than 50 percent of the global physical gold demand in 2013 — private gold ownership is central to India's culture.

For women, owning gold has provided individual security. At Indian weddings, brides often receive gifts of gold — traditionally in the form of jewelry — to provide good fortune to the bride.

For Indian women, gold jewelry serves multiple purposes: objects of adornment, a form of security against life's changes, and a store of savings and wealth. NPR's story estimated in the report that Indian households control an estimated $600 billion to $800 billion worth of gold (or, four times the U.S. reserves in Fort Knox).

But, gold in India is increasingly being used for a more concrete purpose: It is being pledged to secure loans for individuals who don't have access to traditional credit sources. For example, Muthoot Finance has 4,000 branches throughout India and transacts the equivalent of more than $50 million in gold loans per day. Its interest rates of 12 to 24 percent are comparable to U.S. credit card rates.

These loans challenge a traditional view of gold as an idle asset, or something that one puts under his or her bed as a sort of rainy day fund. Especially in an economy where individuals don’t have access to bank accounts or formal credit, the expanded use of gold in India to help individuals build their lives is something to watch from both a humanist and an economic lens.