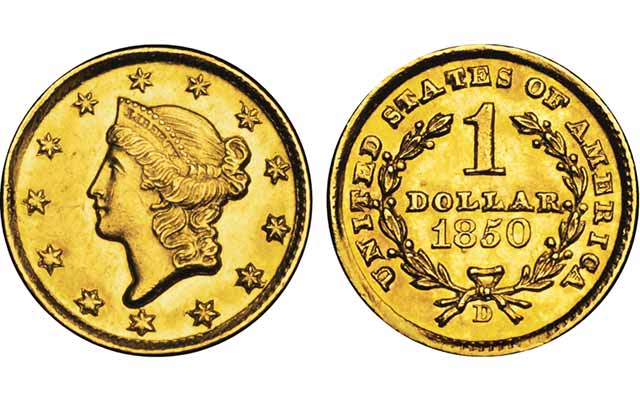 The Coronet or Liberty design introduced on the obverse of the gold dollar in 1849 was also used on the Coronet $20 double eagle. 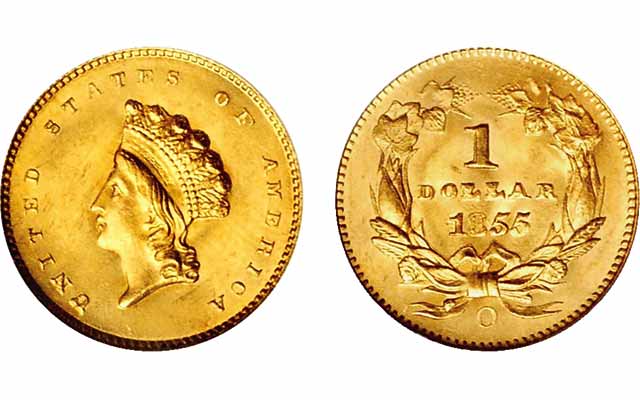 The Indian Head debuted on the gold dollar in 1855 with a small portrait. This example was struck at the New Orleans Mint and bears an O Mint mark. 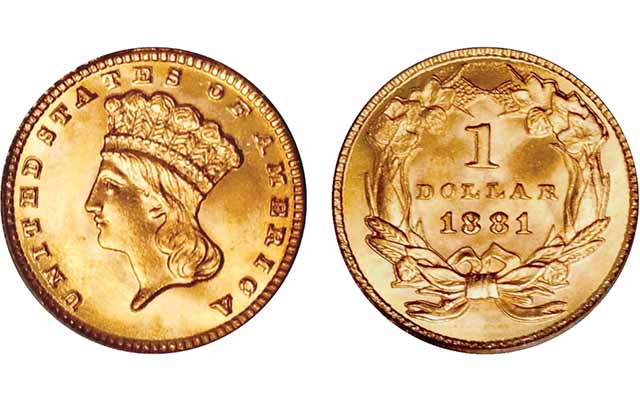 A modified Indian Head portrait was introduced on the gold dollar in 1881.

These coins, minted continuously from 1849 to 1889 inclusive, were conceived for two reasons: (1) Large quantities of gold arriving from California engendered a call for two new coins — this and the double eagle. (2) The new supply of gold changed the ratio of value between silver and gold; silver rose in price on international markets, and gold fell slightly. Silver dollars were hoarded, melted, and exported. By 1850, none were in circulation. The gold dollar filled that gap.

Type I, Coronet or Liberty Head, 1849 to 1854: Designed by James B. Longacre, the Liberty portrait on the obverse was also used on the $20 double eagle. These were the smallest United States coins — only 13 millimeters in diameter. Large quantities were struck at the Philadelphia Mint, fewer at the New Orleans Mint, small numbers at the Charlotte and Dahlonega Mints, and a moderate quantity in 1854 at the newly opened San Francisco Mint. The Philadelphia Mint dollars of 1849 exist in minor portrait variations and with Open Wreath (earlier style) and Closed Wreath reverse. Charlotte Mint coins are known with the Open Wreath reverse (five confirmed with the rumor of a sixth) and the Closed Wreath design.

Type II, Indian Head, Small Head, 1854 to 1856: In 1854, the diameter of the gold dollar was increased to 15 millimeters, to permit easier handling, and Liberty was redone in the Indian Head or Indian Princess style, in high relief. When these were coined the deep recess of the obverse die was opposite 85 in the reverse die, the metal could not fill both spaces fully, and the result was that nearly all Type 2 dollars seen today are poorly struck. Philadelphia Mint coins of this type were made in 1854 and 1855, Charlotte, Dahlonega, and New Orleans Mint coins in 1855, and San Francisco Mint dollars in 1856.

Type III, Indian Head, Large Head, 1856 to 1889: The obverse was modified by making Miss Liberty larger and reducing relief. This solved the problem of striking. Coins were struck at the Philadelphia Mint and the four Branch Mints intermittently until 1861, after which time all were made at the Philadelphia facility except for the 1870-S issue. The 1861-D dollars were stuck after Georgia seceded from the Union and have a special story.

Gold coins were hoarded and did not circulate from late December 1861 until December 1878. Accordingly, later mintages were small. In 1875, only 400 circulation strikes and 20 Proof dollars were coined.

Collecting one of each design type is a popular pursuit. Philadelphia Mint coins of Type I are readily available in grades from Mint State 63 to MS-65. Those of Type 2 are rare above MS-64. Type 3 coins are easy to find in MS-65 and even higher grades.

Until Augustus G. Heaton’s Mint Marks study was published in 1893, hardly anyone paid attention to Branch Mint coins. Obtaining one of each date was the standard way to collect. Into the 20th century when collecting Mint marks became popular it was found that nearly all surviving Charlotte, Dahlonega, New Orleans, and San Francisco Mint gold coins were in circulated grades, typically Extremely Fine and About Uncirculated. New Orleans and San Francisco coins in MS-63 or finer are rare, and Charlotte and Dahlonega gold dollars at this level are extremely so. Cherrypicking for quality is important.