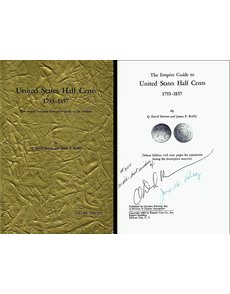 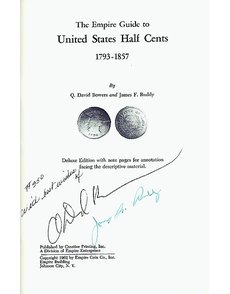 Quick quiz: Who has written more books about U.S. numismatics than any other currently living author?

If you resolved to read all of his books, and budgeted a week for each one, a year from now, you’d still be happily reading!

As a historian, scholar and storyteller, he is peerless. But few remember that he did not actually write the very first coin book published under his name. This peculiar story begins in the 1950s, when half cent collectors faced two big problems.

The first problem was that the standard reference book for the series, The United States Half Cents, by Ebenezer Gilbert, was very rare.

The second was that even if you found a copy, it was outdated and full of errors.

Walter Breen, a brilliant, if troubled, young numismatist, started revising the Gilbert book in 1952, correcting its errors and recording newly discovered varieties. By the early 1960s, Breen finished, but, according to David Fanning, writing in The E-Sylum for June 29, 2003, Breen could not find a publisher and his current employer frowned on him publishing the book under his own name.

Breen offered Dave Bowers and Jim Ruddy, the principals of the Empire Coin Co., an unusual deal: If they would edit and publish his manuscript, they could take credit as authors.

They accepted, and the result, in 1962, was United States Half Cents, 1793-1857: New Revised Complete Descriptive Guide to the Series, a basic update of Gilbert.

Empire wrapped the 2,000 copies of the booklet in covers of a textured gold material, creating a “Deluxe Edition” personally signed and numbered by Bowers and Ruddy. (In fact, no “regular” edition existed; the Deluxe Edition is the only edition.)

Later more comprehensive half cent references were written, such as Roger S. Cohen Jr.’s American Half Cents: The Little Half Sisters, and the landmark Walter Breen’s Encyclopedia of United States Half Cents, 1793-1857.

Breen began his later book with “A Survey of the Principal Literature,” and took a personal swipe at Bowers and Ruddy through his review of the “Deluxe Edition” describing it as: “… a list of varieties with rarity ratings, but without historical material. … Most of the information therein derives from auction catalogues written by me, or questions I answered.”

Not a word about his request that Bowers and Ruddy publish the book under their names — so much for doing a guy a favor!

Do yourself a favor by buying a signed and numbered copy of the Bowers and Ruddy half cent book for about $50.