Gold coins once used in jewelry may trade near bullion value 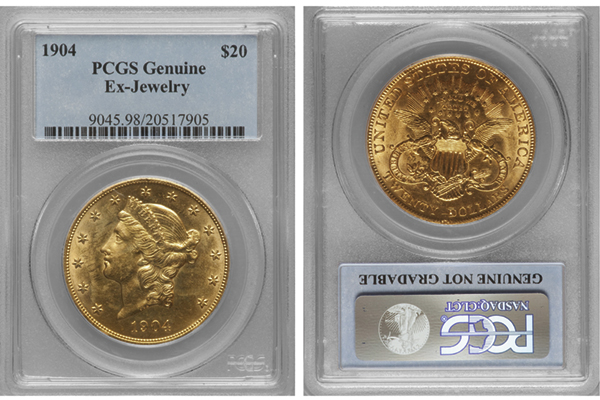 A 1904 Coronet gold $20 double eagle housed in a Professional Coin Grading Service Genuine slab, noting its former use in jewelry.

The term “Ex-Jewelry” is one that’s used a lot to describe the condition of many common-date 20th century pre-1933 U.S. gold coins that have been "improved" by their former owners.

Common coins that were once used in jewelry trade at price levels very close to bullion values. Major grading services will note a coin formerly used in jewelry as “Ex-Jewelry” or describe a specific problem more fully, such as “mount removed.” Sometimes a grading service will use the catch-all term, “damaged,” which covers a multitude of possible problems.

To describe a coin as “jewelry” quality might mean that it shows evidence of harsh cleaning or burnishing/polishing that gives the surfaces a very brilliant but highly unnatural sheen.

Prices for these pieces can be close to a coin's melt value. For example, with gold at $1,325 an ounce, a jewelry-quality Saint-Gaudens $20 double eagle or Coronet double eagle of common date might be purchased by a dealer from a collector at the $1,320 level and may be sold to a collector at the $1,335 level.  A problem-free About Uncirculated example of the same types may cost around $50 to $60 more.

Considering that a $20 double eagle has .9675 ounce of gold, jewelry-quality gold coins will have a very low premium over bullion value (comparable, in fact, to an American Eagle 1-ounce gold bullion coin).

There is one impairment that even “jewelry” grade does not describe: holes. That’s because a hole removes metal and may substantially affect the bullion value of a coin.