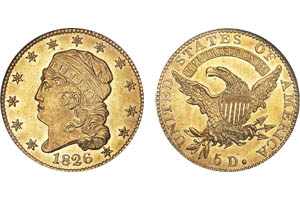 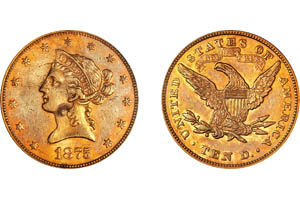 At $235,000 the most expensive coin in the auction was an 1826 Capped Head gold $5 half eagle graded Mint State 65 by Numismatic Guaranty Corp. Although contemporary U.S. Mint records show that just over 18,000 half eagles were struck in 1826, gold expert David Akers estimated that fewer than 40 exist in all grades and Heritage’s lot description suggests that even that number may be larger than the extant population.

Heritage placed the piece in the condition census as the second- or third-finest known example. Its ownership traced back to Abe Kosoff’s 1968 auction of the Alex Shuford Collection and was most recently from the Donald E. Bently Collection.

For comparison, the finest known example, graded MS-66, sold as part of Heritage’s offerings from the David and Sharon Akers Collection at its 2014 FUN auction for a record $763,750.

The next most expensive coin was an 1845 Coronet gold $2.50 quarter eagle graded NGC Proof 67 Ultra Cameo that brought $223,250. It is considered the finest of three confirmed examples, and in 1979, at a Bowers and Ruddy auction, was offered as part of a three-piece gold Proof set of 1845 coins consisting of the quarter eagle, half eagle and eagle. Heritage notes that at least four gold Proof sets were struck by the U.S. Mint in 1845, and adds, “There is appreciable evidence that at least one of the sets was meant for a diplomatic visitor, though such evidence is largely circumstantial.”

The Proof 1845 quarter eagle was at one time part of the legendary Ed Trompeter Collection. It was also previously offered at an Aug. 5, 2012, Heritage sale where it brought $258,500.

Another Proof example is part of the National Numismatic Collection at the Smithsonian Institution, and a third example was once part of the John Jay Pittman collection that was sold by Akers in a 1998 auction.

The third most expensive coin in the auction was an 1875 Coronet gold $10 eagle graded About Uncirculated 50 by Professional Coin Grading Service that sold for $211,500. One of just 100 pieces struck, Heritage estimated that just five or six circulation strike examples exist in all grades today. It last sold as part of a Jan. 10, 2004, Heritage auction where it brought $51,750.00.

Other standouts included a 1909-S Lincoln, V.D.B. cent graded PCGS MS-67 red, one of just 11 graded as such with none graded finer by PCGS. The cent was described by Heritage as “essentially ‘as struck’ ” with bright Mint luster and no trace of yellowing, carbon spots or objectionable contact marks. It brought a robust $117,500.

As evidence of how subtle differences in quality impact prices, on Jan. 9 Heritage sold an example of the key issue graded PCGS MS-66 red with a green Certified Acceptance Corp. sticker indicating quality within the grade for $25,850.

An undated Lord Baltimore Maryland shilling from 1659 graded PCGS AU-50+, one of the finer examples of this issue known, sold for $49,937.50, close to the $48,875 that it brought when offered at the Stack’s Bowers Galleries November 2012 Baltimore auction. In the Stack’s Bowers auction, it was described as “A superb example of this elusive and historically distinctive issue, coined for Cecil Calvert for circulation in his proprietary colony of Maryland.” Most examples of the issue are in poor condition.

This example was once offered as part of Stack’s 1983 sale of the John L. Roper Collection. The Stack’s Bowers 2012 catalog description noted, “The Roper provenance usually accompanies coins of lovely quality and positive eye appeal, and this coin is no exception.”