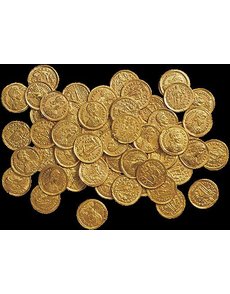 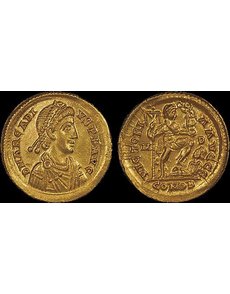 What is regarded as one of the largest Roman gold coin hoards ever found in the United Kingdom was discovered in early October.

The hoard of 159 late Roman gold solidus coins, found by an anonymous metal detectorist on private land in the north of the district of St. Albans in Hertfordshire, was announced Oct. 16 by local officials.

While larger hoards have been discovered in the United Kingdom, those have been composed predominantly of bronze or silver coins, or sometimes both, with few if any gold coins included.

The hoard dates toward the end of Roman rule in Britain. It comprises predominantly coins of Roman emperor Honorius (A.D. 395 to 423) and his brother Arcadius (395 to 408), a Byzantine ruler, but at least three other rulers are represented, including Theodosius, the two brothers’ father. All but one of the coins are in Extremely Fine condition.

A team from St. Albans City & District Council’s Museums’ Service investigated the site at the beginning of October and confirmed the find. The coins were scattered across a fairly wide area. Evidence suggests that the hoard was disturbed in the past few hundred years by quarrying activity or ploughs.

Practically no other comparable gold hoards of this period have been found, according to David Thorold, prehistory to medieval curator at Verulamium Museum in St. Albans. After 408 no additional coin supplies reached Britain.

Thorold said that during Roman occupation of Britain, coins were usually buried either as a religious sacrifice to the gods, or as a secure store of wealth, with the aim of later recovery. “Threat of war or raids might lead to burial in the latter case, as may the prospect of a long journey, or any other risky activity.”

The gold solidus was not a commonly encountered coin for most users of Roman coins, due to its extremely high face value.

“They would have been used for large transactions such as buying land or goods by the shipload,” Thorold said. “Typically, the wealthy Roman elite, merchants or soldiers receiving bulk pay were the recipients.”

Most coins in the 1,600-year-old hoard were struck in Milan (117 pieces), but 11 each were struck in Ravenna and Trier. Other mints represented in the hoard are Rome (seven examples), Constantinople (three), Thessalonica (three), Lyons (two) and Sirmium (one), with the mints of four coins unknown until further cleaning, according to Thorold.

Ninety-five coins were struck under Honorius, while 42 are from the reign of Arcadius. Other rulers represented include Valentinian II (11 examples), Theodosius (seven) and Gratian (one), with three unknown and requiring further cleaning, according to Thorold.

Finds such as the coin hoard are governed by the Treasure Act 1996. The next stage is for the British Museum’s panel of independent experts to examine the coins and make their report to the coroner (a local official who decides such cases), who will determine whether they are to be considered as ‘treasure’ under the act.

If the hoard is declared treasure, the local museum will have a chance to raise the money to pay for the hoard that will be distributed to the anonymous finder (the finder usually shares the fee with the landowner, if they are not the same). The value of the coins has not yet been determined.

Councillor Mike Wakely, who is responsible for “sports, leisure and heritage” matters on the St. Albans City and District Council, said he hopes the find will be displayed at the local museum as the treasure is declared and the formalities sorted out. “This is an exciting find of national significance, and one that our museum’s team is very excited about,” he said.

The museum will host a presentation about the hoard on Nov. 1.

Most of the coins have been identified by the numbering system employed in Volumes IX and X of The Roman Imperial Coinage, by Harold Mattingley and Edward A. Sydenham, and Thorold said the museum hopes to be publishing the full details soon.