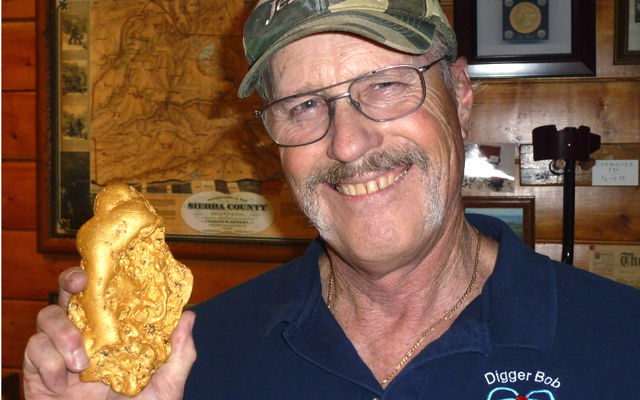 Gold nugget weighing 70 ounces found by an unidentified man in Butte County in California is held by Bob Van Camp, “Digger Bob.” The nugget has been named the Butte Nugget and sold in a transaction brokered by Kagin’s 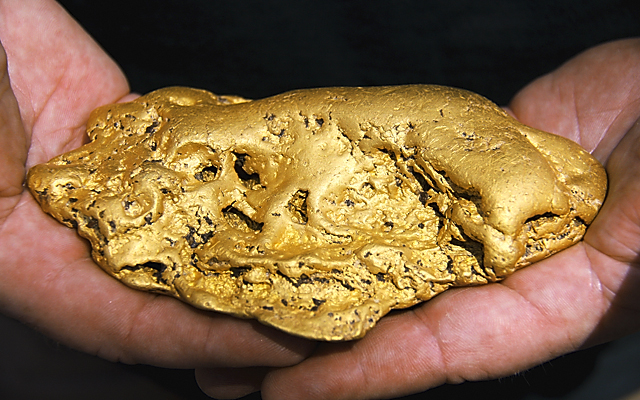 Gold nugget weighing 70 ounces found by an unidentified man in Butte County in California is held by Bob Van Camp, “Digger Bob.” The nugget has been named the Butte Nugget and sold in a transaction brokered by Kagin’s. 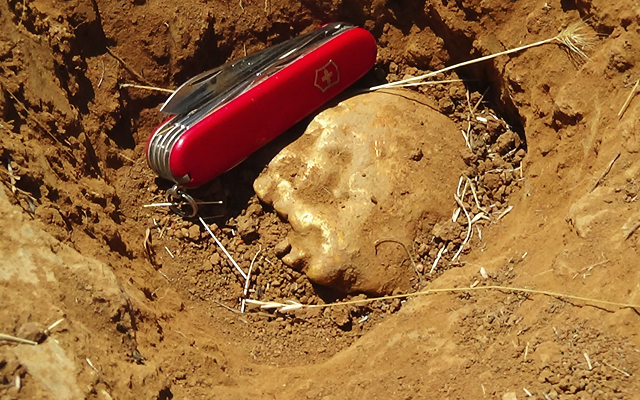 Gold nugget weighing 70 ounces found by an unidentified man in Butte County in California is held by Bob Van Camp, “Digger Bob.” The nugget has been named the Butte Nugget and sold in a transaction brokered by Kagin’s.
Previous
Next

Bob Van Camp saw and held a dream. It wasn’t his dream, but he enjoyed it nevertheless.

Van Camp, of Paradise, Calif., was privy to seeing the Butte Nugget within hours of an anonymous prospector finding it in July 2014 while using a metal detector in the mountain foothills of Butte County, Calif.

The nearly 70-ounce nugget was sold Oct. 24 to an unidentified buyer who paid an undisclosed six-figure amount for it. Kagin’s Inc. of Tiburon, Calif., brokered the transaction (see related article, page 28)
Van Camp, or “Digger Bob,” as he’s known to metal detecting enthusiasts, runs a metal detector dealership, Comstock Metal Detectors, as a sideline to his day job.

To share with and encourage other prospectors and other metal detector users, Van Camp made a video showing the nugget and discussed details about it.

“Why do we do what we do? We do it for the dream and the dream is a dream of striking it rich. I’ve got something to show you that you’ve never seen before,” Van Camp said at the opening of the video. “It is an extreme example of a life changer, a retirement piece, it’s like hitting the lottery.”

The video camera zooms in on a cigar box and Van Camp opens the box to reveal the Butte Nugget. Van Camp explains that it is a placer nugget that does not have quartz in it.

“It’s well water worn but was not found near any present watercourse,” he said.

Van Camp then demonstrates with a metal detector what the nugget sounded like when the finder’s metal detector passed over it. The nugget was found at a depth of only 12 inches.

He said the credit for the find doesn’t go to the metal detecting device but to the finder.

“The finder is an experienced prospector. He owns several [metal detecting] machines and knows how to use them. He knows his geology and knows what to look for in the field. He’d found several smaller nuggets in the area before.”

Van Camp said: “Can you imagine what he said when this [nugget] started to reveal itself out of the ground? Well, I can’t repeat what he said, but you can imagine.”

He said the finder, who Van Camp said he calls “Mr. Smith,” because he doesn’t know his real name, let him make the video as encouragement to other metal detector users.

“Don’t give up, they’re still out there. Buried treasure in all its forms is still out there and still being found today,”  Van Camp says at the close of the video.

“Follow the three Ps: persistence, patience and perseverance. Keep at it, keep the dream alive,” he advises fellow treasure hunters.