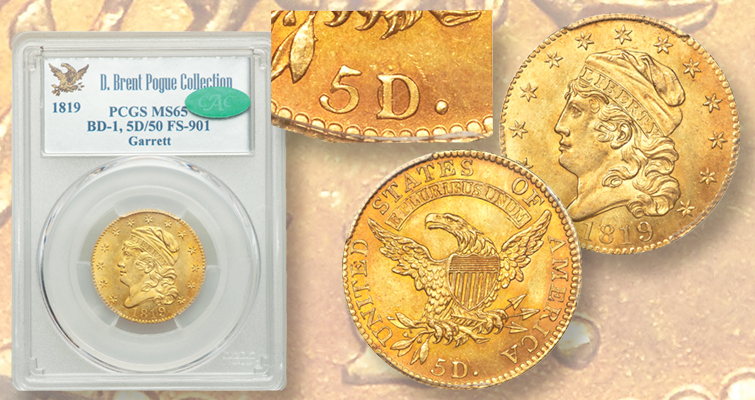 An 1819 Capped Head $5 half eagle with a blundered reverse denomination from the McCoy Family collection led bidding at Heritage’s Aug. 4 Platinum Night auction, with the MS-65 stunner with a green CAC sticker realizing $444,000. 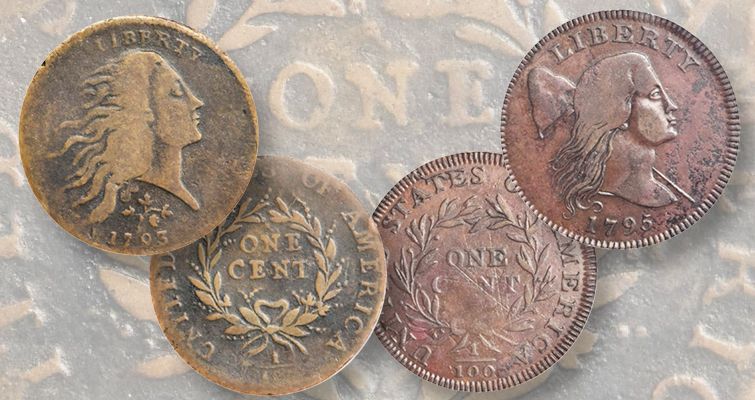 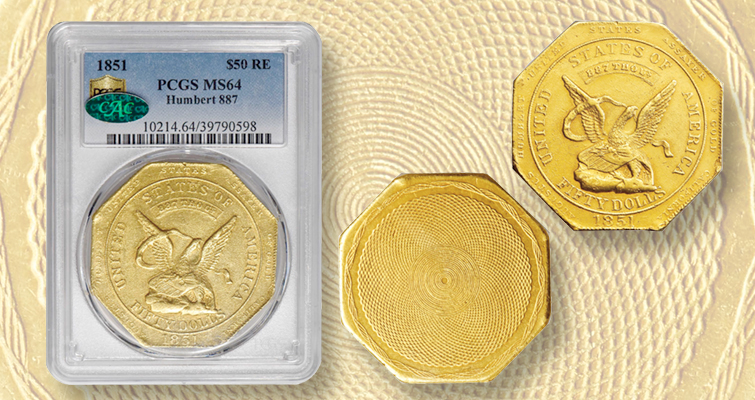 These two sales replaced the auctions originally set to accompany the American Numismatic Association World’s Fair of Money in Pittsburgh, which was canceled.

A look at prices realized from Heritage’s U.S. coin auctions shows that gold issues make up the top 20 lots with nearly half coming from coins in the McCoy Family of Capped Head Half Eagles. At $444,000, Heritage’s top lot of the night was an 1819 Capped Head $5 half eagle graded Mint State 65 by Professional Coin Grading Service and bearing a green Certified Acceptance Corp. sticker. The reverse is particularly interesting with an overpunched denomination. It represents the Bass-Dannreuther 1 variety listed in their book Early U.S. Gold Coin Varieties and FS-901 in the latest edition of the Cherrypickers’ Guide To Rare Die Varieties.

Heritage explains that the blundered reverse shows the D in 5D, representing the denomination, formed by the letter I punched over an errant 0, though it is sometimes also described as 5D/50.

Perhaps 20 examples survive from this die pairing. The offered coin is not just the finest-known of the variety, but of all three die pairings known for the date. Heritage observed, “This piece has superb eye appeal and it is a pristine Gem with lovely light to medium yellow-gold contrasted by deeper orange hues at the right obverse and across much of the reverse.”

It has a rich provenance that traces back before 1867 when it was purchased by Joseph J. Mickley, sometimes called the “father of American coin collecting.” It sold at Bowers & Ruddy’s 1979 auction of the Garrett Collection for $85,000. More recently it was offered at Stack’s Bowers and Sotheby’s February 2016, Part III, offering of the D. Brent Pogue auction where it sold for $423,000, without the green CAC sticker then, as the Pogue coins were not submitted prior to the sale. The Pogue cataloger praised the bold strike and essentially mark-free surfaces, adding, “The reverse is a storm of satiny luster, deeply toned with mingled shades of dark yellow and bright orange, a visceral aesthetic delight.”

Beyond its auction appearances it’s been well-published, appearing in David Akers’ 1979 book United States Gold Coins, An Analysis of Auction Records. Volume IV: Half Eagles 1795–1929; in Q. David Bowers’ book of the same year titled The History of United States Coinage As Illustrated by the Garrett Collection; and in Walter Breen’s Complete Encyclopedia of U.S. and Colonial Coins, 1988.

The first runner up in Heritage’s sale was another half eagle of the same series, this one a BD-1 1821 Capped Head half eagle graded MS-63+ by PCGS. It is one of 15 to 20 examples known from two die pairings, of which only five, or so, are considered Mint State. Heritage noted, “This example is extremely attractive for the grade with full mint frost seen below natural medium green-gold hues. On the obverse, there are a few splashes of orange-gold; less so on the reverse.”

The recorded provenance in Heritage’s roster of known 1821 Capped Head half eagles lists its first known owner as Amon Carter, and it was offered at Stack’s 1984 sale of the Amon Carter Family Collection. Thirty years later it was presented at Ira & Larry Goldberg’s Long Beach Sale, where it realized $540,500, then a year later it appeared at Heritage’s 2015 Florida United Numismatists auction where it realized $352,500.

Two Proof strikes are known to have been struck from these dies, and the finest Mint State example, graded PCGS MS-66+, sold for $564,000 at the May 26, 2016, Pogue IV auction. That Pogue sale explained the date’s rarity compared with the relatively high mintage, writing, “Though a mintage of 34,641 is recorded for the year, the vast majority of coins struck in 1821 were probably dated 1820.”

Another star from the McCoy Collection was an 1826 Capped Head $5 half eagle, BD-1, graded MS-65 by PCGS and bearing a green CAC sticker, which sold for $264,000. Heritage considered it one of the two finest coin in the McCoy Collection from a standpoint of appearance, praising “dazzling thick, unbroken mint frost with rich medium to deep green-gold color on both sides.” The auction was Heritage’s fifth offering from the McCoy Family and featured two dozen examples from the series that were all selected with consideration to both numerical grade and eye appeal.

While gold ruled at Heritage, a well-worn 1793 Flowing Hair, Strawberry Leaf cent graded Very Good 10 by PCGS topped bidding in Las Vegas, realizing $660,000. Listed by Dr. William Sheldon as NC-3 in his guide to the series, it looks similar to other 1793 Flowing Hair, Wreath cents, except it has a cluster of four small trefoil (three-lobed) leaves above the date. It is the only example of the coveted “Strawberry Leaf” cent where all four leaves and the stem remain clearly outlined. The coin is an enigmatic issue from the first year of cent production at the Philadelphia Mint.

That cent came from the ESM Collection of United States Large Cents, as were many of the top lots in the Rarities Night auction. The finest 1795 Liberty Cap, Jefferson Head, Lettered Edge cent is listed as NC-1 in Sheldon due to its “noncollectible” status. The coin in the auction, graded Very Fine 30 by PCGS, sold for $408,000.

The Jefferson Head cent is recognizable by its lack of a hair ribbon, with individual strands of Liberty’s hair appearing nearly straight. Just five examples of the Lettered Edge variety are known from two die marriages.

The offered cent has a provenance that traces back to its first-known auction appearance of John W. Haseltine’s sale of the Harold P. Newlin Collection in April 1883, and it was later offered in several notable auctions before trading privately in recent years. It is the plate coin for the variety in Walter Breen’s encyclopedia of the large cent series and the reference book to the series by William Noyes.

An example of the more common Sheldon 80 1795 Liberty Cap, Jefferson Head, Plain Edge cent graded Very Fine 20 by PCGS sold for $90,000 when offered as the previous lot. The cataloger wrote on the distinct design type, “Certainly one of the most interesting and rarest issues of the early copper series is the famous Jefferson Head cent, a name that has persisted, although any resemblance to the third president of the United States seems to be slight,” explaining that it was likely the product of John Harper’s attempt to get a coining contract. While made outside of the U.S. Mint, these are collected alongside regular issue large cents.

Sandwiched in between the two discussed large cents on the Stack’s Bowers Galleries leader board was a Reeded Edge 1851 Augustus Humbert $50 gold piece graded MS-64 by PCGS and bearing a green CAC sticker that is among the finest of all examples of the series collected as pioneer gold. Humbert was appointed United States assayer and he placed his name on large octagonal $50 gold pieces that were accepted by many banks and merchants on par with legal tender coins. Though officially termed an ingot, these are sometimes termed slugs, quintuple eagles, or a five-eagle piece.

The obverse banner above the eagle reads 887 THOUS, and the coin is listed as K-7 in Donald Kagin’s reference.

Stack’s Bowers praised the exceptional strike and “flashy luster and bright lemon-yellow color with warmer shades around the devices,” while adding, “Minor die rust in the obverse fields is as-made and alludes to the resourcefulness demanded of a provisional mint operating under overwhelming demand.” 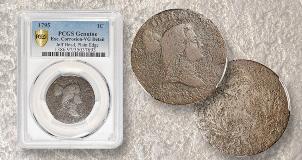 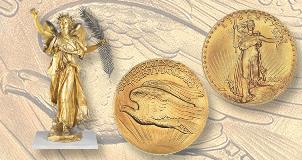 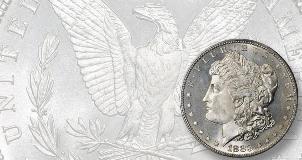