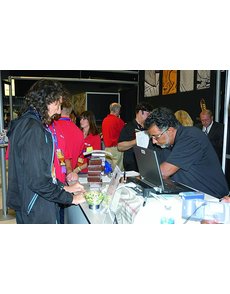 Bruce Kutcher, left, from Boston was the first in line Aug. 13 for the privilege to buy up to five 1-ounce 2013-W Reverse Proof gold American Buffalo coins at $1,640 per coin from the U.S. Mint. Kutcher purchased his maximum allotment. 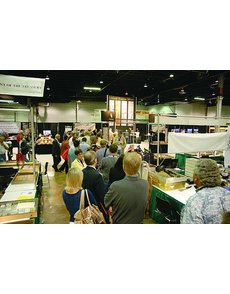 The line formed by individuals seeking to purchase the Reverse Proof American Buffalo gold coin was long and steady on Aug. 13 at the ANA convention. 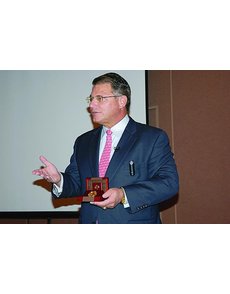 Acting U.S. Mint Director Richard A. Peterson tantalized guests at the show by holding up an example of the Reverse Proof American Buffalo coin.

The Reverse Proof 2013-W American Buffalo gold coin was a hot commodity Aug. 13 at the U.S. Mint’s booth at the American Numismatic Association convention in Rosemont, Ill., with three dealers acquiring more than half of the coins through surrogates.

The sales represented the first opportunity for collectors and dealers to buy the coins and have the pieces immediately in hand. The U.S. Mint began offering the coins for sale via its website at www.usmint.gov and by telephone at 800-872-6468 at noon Eastern Daylight Time Aug. 8, but coins were not being shipped as of Aug. 13.

Each customer in line at the U.S. Mint’s booth on the convention bourse was permitted to buy a maximum of five of the .9999 fine gold coins, at a price of $1,640 per coin. Most of those in line took advantage of the maximum, paying out a total of $8,200 for a five-coin allotment.

Acting U.S. Mint Director Richard A. Peterson tantalized show attendees by displaying one of the coins in its highly polished wood presentation case during remarks he gave before the show’s opening. U.S. Mint officials announced through the numismatic press the week before the convention that the bureau planned to have a quantity of the Reverse Proof gold coins for sale at the show.

A line of coin dealers and their representatives had already formed in front of the Mint booth before the show’s official opening to the public, and the line continued to grow as more collectors and dealers sought to obtain the coins. Because of the quick sellout of the 1,000 coins, Peterson arranged for another 1,000 coins to be delivered to the convention center, expected to arrive for sale by Friday, Aug. 16.

SilverTowne from Winchester, Ind., managed to secure nearly half of the 1,000 coins the Mint sold Aug. 13, by offering a bounty of $100 per coin to those who obtained the coins. The firm expected to acquire about 400 coins from its sources buying the coins at the show.

SilverTowne’s president, David Hendrickson, said the firm would be submitting the coins to Numismatic Guaranty Corp. for certification. Hendrickson said any coins certified Proof 70 were expected to be immediately offered for $2,995 each via the Coin Vault cable television network.

John Maben from Modern Coin Mart in Sarasota, Fla., said he was able to purchase between 100 and 110 coins. He initially paid a premium of $50 per coin, then bumped the premium up to $75 and then to $100. Maben divided the number of coins he purchased evenly between Professional Coin Grading Service and NGC for certification.

Maben said he expected to offer the coins through his retail business at a price in the lower range from $2,000 and $3,000 per coin for those pieces graded Proof 70.

Lee Minshull from Lee Minshull Rare Coins Inc. in Palos Verdes Peninsula, Calif., said he purchased 100 to 150 coins at a premium of a little over $100 per coin. Minshull said Aug. 14 he had not yet received the results of grading submissions, which he had evenly divided between PCGS and NGC.

Minshull added that he was frustrated by the Mint’s handling of the sales. He said he had wired the Mint “considerable funds” for a substantial number of coins through the normal sales process when they went on sale Aug. 8. His frustration resulted from the Mint’s not immediately shipping the coins ordered earlier, but having only a small number of the coins at the show available for direct purchase.

As of 5 p.m. Eastern Time Aug. 1, the Mint had sold 29,453 of the Reverse Proof American Buffalo gold coins through its various sales venues, according to a sales meter updated daily at the Mint website. ¦