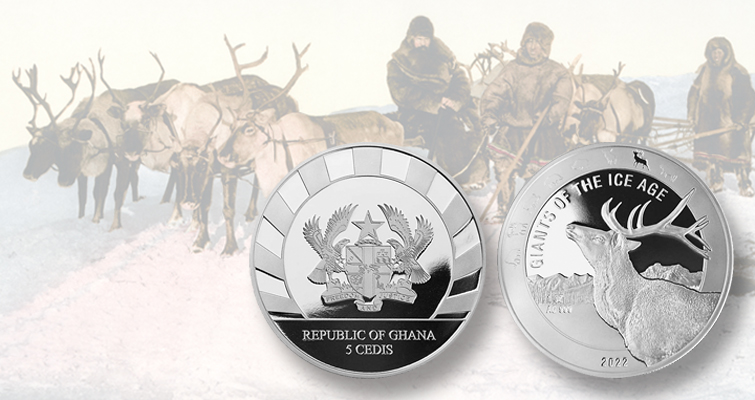 Ghana continues the Giants of the Ice Age silver bullion series with the reindeer, the seventh subject of the 5-cedis series.

Though reindeer may reside far away from Ghana, they are the subject of the seventh issue from the “Giants of the Ice Age” silver bullion coin series from Ghana.

Also known as caribou, Holarctic deer found still today throughout Europe, North America, and Asia, the reindeer has a thick, woolly undercoat and stiff, long hairs, making them extremely well suited for the Arctic climates in which they reside.

Reindeer remains have been found much further south, proving their presence during the late Pleistocene era as far south as Tennessee and Virginia, but as the glaciers receded, so followed the reindeer back north.

The Giants of the Ice Age series commemorates the eight extinct animals which ones roamed the earth during the last ice age, which took place during the Pleistocene Era.

Struck at the LEV - Leipziger Precious Metals Factory, the Giants of Ice Age series commemorates eight extinct animals of the Pleistocene Era, according to the American distributor of the coin, which does not clarify the reference to “extinct” animals.

During the Pleistocene, which ended about 11,700 years ago, the most recent ice age occurred.

The Brilliant Uncirculated 1-ounce, .999 fine silver 5-cedis coins has a mintage limit of 15,000 pieces and is delivered in a protective capsule.

The obverse depicts the Republic of Ghana coat of arms and the denomination.

The reverse features a side profile of a reindeer. Also on the reverse is the series name GIANTS OF ICE AGE, date, purity, weight and the outlines of the animals featured in the series.

American distributor APMEX offers the coins as low as $8.99 over the precious metal “spot” price at time of order, with discounts for quantity and based on payment method. 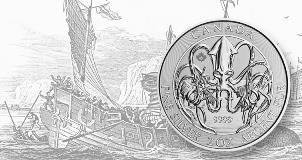 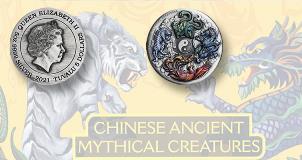 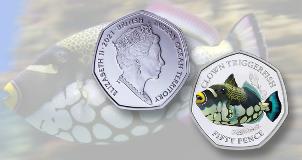