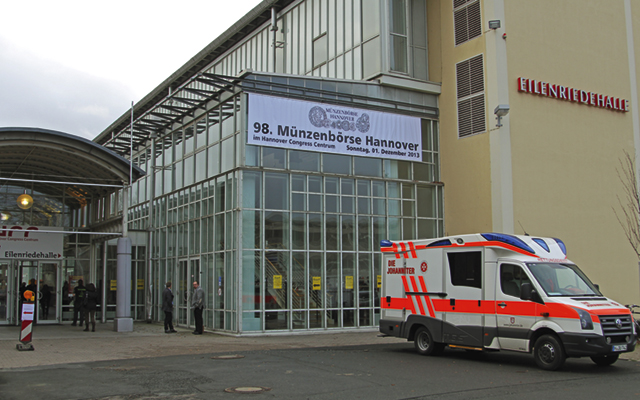 The Münzenbörse Hannover, or Hannover Coin Show in Northern Germany, is held twice a year at the Hannover Congress Centrum. The 100th show is scheduled for Nov. 30, 2014. 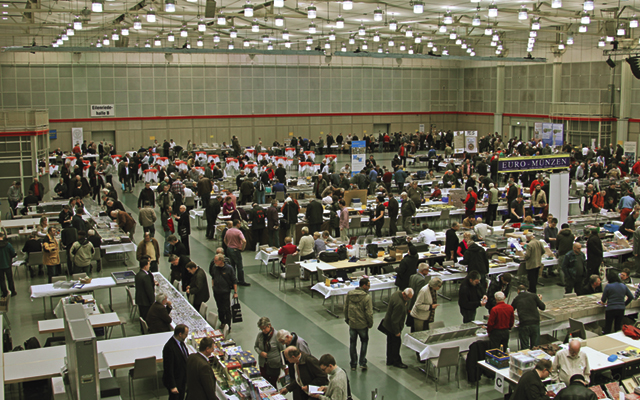 A view of the bourse at Germany’s longest active coin fair, the Hannover Coin Show.

Twice a year, collectors and dealers converge in Hannover, in northern Germany, for a one-day coin show.

Organizers have announced that the 100th Münzenbörse Hannover (Hannover Coin Show) is scheduled for Nov. 30, 2014.

A medal designed by Peter Götz Güttler is being issued to commemorate the anniversary, and visitors to the show will have the chance to produce their own commemorative medal.

The 100th Hannover coin show is slated to be held at the Eilenriedehalle in the Hannover Congress Centrum, from 9:30 a.m. to 4 p.m.

The show was founded in 1965 through the initiative of a local coin society chairman, Georg Wimmelmann.

Though unremarkable today, the concept of a local society hosting a show was outside the traditionally academic scope, according to Björn Schöpe, who is representing the show organizers.

“The collectors in Hannover, in contrast, hailed this innovation,” Schöpe said.

The show grew as economics led more Germans to seek out investments, and in 1970 the local numismatic society spun off the show when the show became too profitable (and large), organizers feared, for the society to maintain its nonprofit status.

In 1995 the show was sold to Rainer Bühnemann, who operated a coin dealership. In 2005, Bühnemann sold the coin firm to Christoph Walczak, who then took over the coin show in 2008.

Walczak is leading the show into the future, Schope said, with a family-run company including sons Christian and Patrick assisting in running the show.

He targets dealers from outside Germany and encourages auction houses to attend the show, changing the makeup of the dealer roster.

Admission to the show is €7, but preregistration online will save €1.