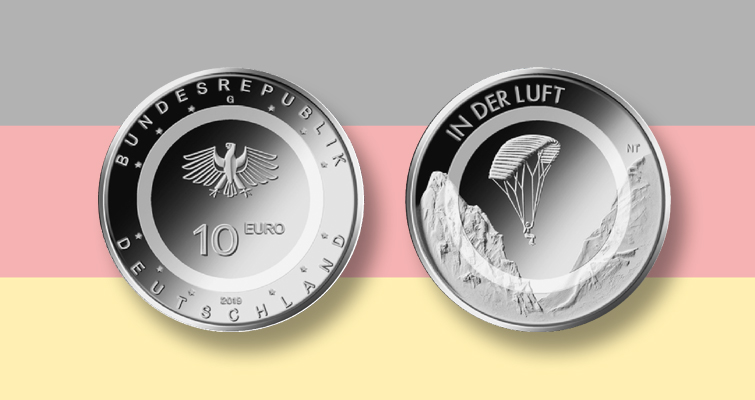 Germany in 2019 will begin a series of circulating commemorative €10 coins featuring the ringed-bimetal/polymer coin, with a theme of “In the Air.”

Coin collectors in Germany were still recovering from the mayhem that took place in front of Bundesbank offices all over the country during the first-day emission of the new €5 bimetal/polymer subtropical zone coin in April when they were surprised by another numismatic sensation:

The German government will launch in 2019 a new €10 commemorative coin series featuring the innovative polymer ring.

The first of three coins will be titled “In the Air” as part of the new “Air Moves” series.

According to a press release from the German Federal Ministry of Finance, the new polymer-ringed coin is expected to be issued by the end of April 2019, meaning that Germany will have two different denominations of polymer accentuated coins for 2019: the €5 collector coins series “Climate zones of the earth” will continue in 2019.

The metallic composition of the 9.7-gram €10 coin will be a copper-nickel alloy, similar to its relatives from 2018. The first struck examples of the new €10 coin are set to be presented at next year’s World Money Fair in Berlin.

The first €10 polymer-ringed coin, “In the Air” invites collectors to actively explore the air.

The obverse, designed by artist Natalie Tekampe, shows a paraglider, framed by the transluscent polymer ring, in the midst of a mountainous landscape. While the rings in the climate zone series are of five different colors, the ring in new €10 coins will be transparent and translucent to depict the “air” topic of the series.

The minimalist, modern reverse, the value side, created by sculptor Andre Witting from Berlin, will be the same for 2019 and 2020. It shows the iconic German eagle (“Bundesadler”), inscribed lettering translating to “Federal Republic of Germany,” the face value, the 12 European stars and one of the five German mint marks (A,D,F,G and J). The smooth edge of the coin will be lettered with an inscription translating to “Air Moves,” the name of the new coin series.

The polymer ring serves not only as a fun numismatic special effect, but as a serious counterfeiting security device that was invented by the State Mint of Baden-Wuerttemberg and the Bavarian Central Mint.

The two mints first used the polymer ring in 2016 and won the prestigious Coin of the Year award in 2018, bringing Germany back onto the numismatic landscape after decades of a conservative coin emission policy. The German government continues to give natural sciences topics priority in the coming years. 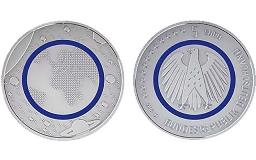 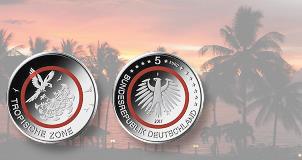 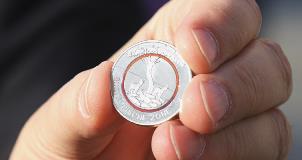