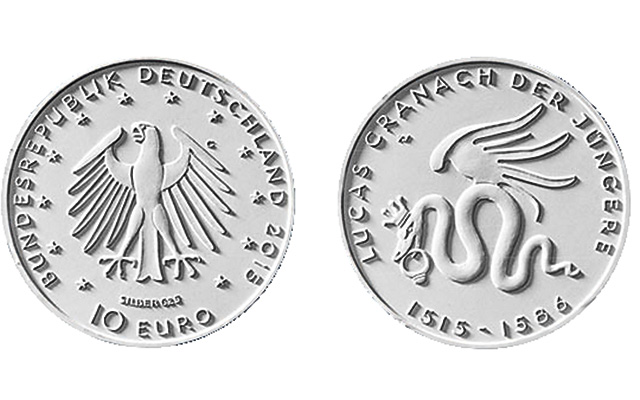 Renaissance-era painter Lucas Cranach the Younger will appear on a 2015 commemorative €10 coin from Germany.

Renaissance-era painter and portraitist Lucas Cranach the Younger has been chosen to be honored by the design of a 2015 €10 commemorative coin in Germany.

The coin will celebrate the 500th anniversary of the artist's birth.

The workshop has been identified by a winged snake, which was used as a sort of trademark and appears on the reverse design of the coin.

The obverse depicts the German eagle, the year 2015, the name of Germany in German, the denomination, the 12 stars of Europe, and the G Mint mark, indicating that the coin will be struck by the Karlsruhe Mint.

The Lucas Cranach the Younger coin is due for release in October 2015.