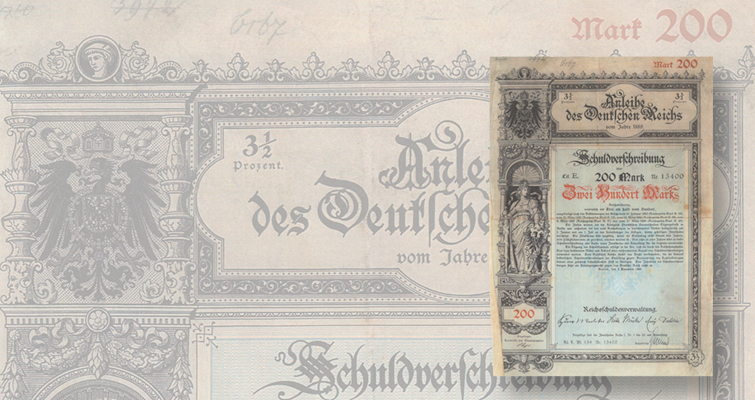 Germany's Ministry of Finance has consigned millions of historic bonds dating from 1878 to 1938 to auction. 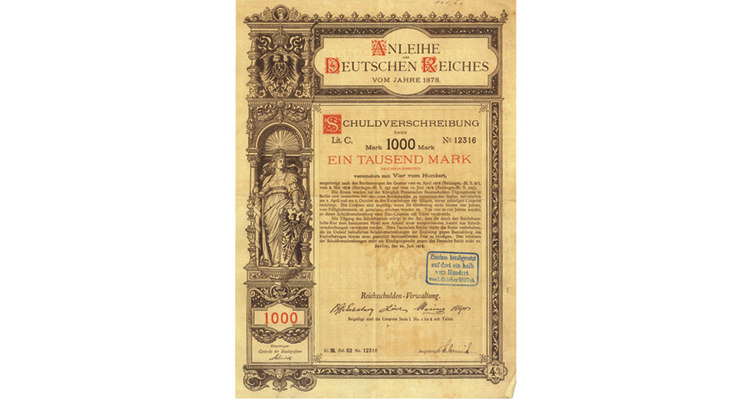 Among the earliest issues to be offered by Spink and Son is this 1878 1,000-mark bond, dating to the rule of Bismarck. 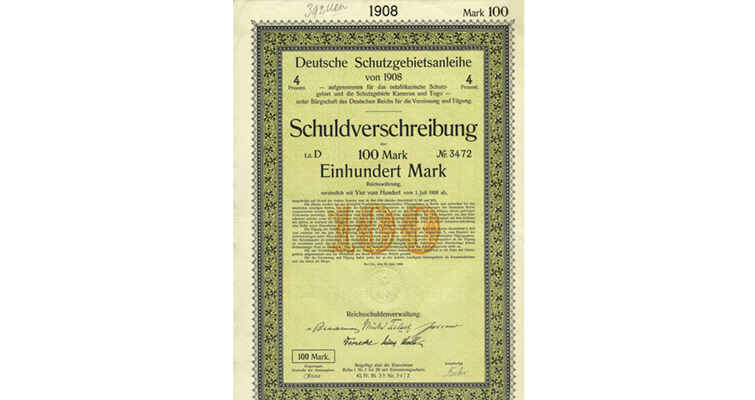 Also offered is a 1908 100-mark loan of the German Reich. Rarer and scarcer pieces are to be offered in single-item to five-item lots, with more common pieces offered in larger groups. 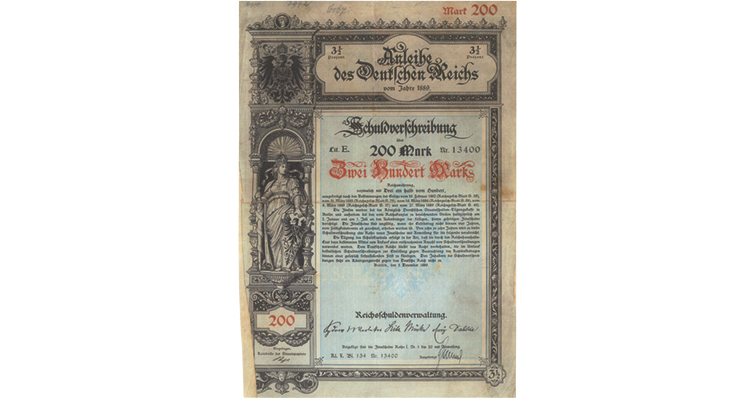 This 1889 200-mark loan is among the various issues from the Germany Ministry of Finance to be offered at auction in London in November.

The German Ministry of Finance has appointed the firm Spink and Son Ltd. to sell at public auction in London on Nov. 20 the entire inventory of historic bonds from the former German Reichsbank. Any revenue from the sale will go directly to the Nazi-Crimes Compensation Fund.

The ministry, known by the abbreviation BADV in German, started selling the Reichsbank inventory in the early 2000’s, but until now sales only involved the papers of private companies. The November sale will, says Spink, “touch the very heart of German economic history.” A sale large in both quality and quantity, it will include treasury bills and bonds of the Reichsbank and of the German federal states, covering the whole of German financial history from Bismarck in 1878 until the beginning of Nazi Germany in 1938. It will exclude, however, all items with emblems of the Nazi rule, such as the swastika. German law prohibits the display and use of symbols connected to the Nazi rule.

The certificates have a remarkable history. They survived bomb damage in World War II because they were stored deep in the subterranean safes of the Reichsbank in Berlin. During the several decades they were under control of East Germany they remained mostly untouched. After reunification in 1990, the ministry investigated all possible claims, and now that that process is complete the collection can be liquidated. Thomas Dress, vice president of the BADV, said, ”We are happy to make available these important witnesses of German economic history to the public and interested collectors.”

Among the rarities to be offered are loans of the German Reich from 1878, 1889, and 1908; Royal Prussian Treasuries from 1914 and Prussian Treasuries of 1922; and German Empire issues of 1923 guaranteed in gold. The rarer issues will often be offered in one-piece lots, with somewhat more common issues of these same categories to offered in multiple-piece lots, though none containing more than five items. Much bigger quantities will be offered of German Reich Treasuries from 1922 (approximately 14,000 pieces) and from 1934 and 1935 (about 40,000 items) and the whole restructuring of German debt from 1925 (more than half a million certificates).

Also offered will be German loan certificates for what are called the “Schutzgebiete” (protectorates), for example Togo and Cameroun from 1908 to 1914 and the complete set of all the German war loans from 1914 to 1918.

Additionally the auction will offer items from the German states such as Thüringen in 1937, Bavaria in 1941, and many more.

Given the vast scope and size of the sale, where some lots may be just a single piece while others may surpass half a million items, Spink says that some interesting provisions are being made to make it interesting for dealers. For example, the successful bidder on a lot will get all the certificates of the issue. The larger quantity lots will not be sent to London but will remain in Berlin from where they will be sent to the buyer. The buyer also has the option to take a smaller quantity of items and will get a written “guarantee” by the BADV that the other items were destroyed. Furthermore, the Ministry of Finance “guarantees” that no additional certificates remain in its possession.

The auction will be held in the sale rooms of Spink’s London office at 69 Southampton Row, Bloomsbury, London WC1B 4ET. More information will be posted on the firm’s website, https://www.spink.com.