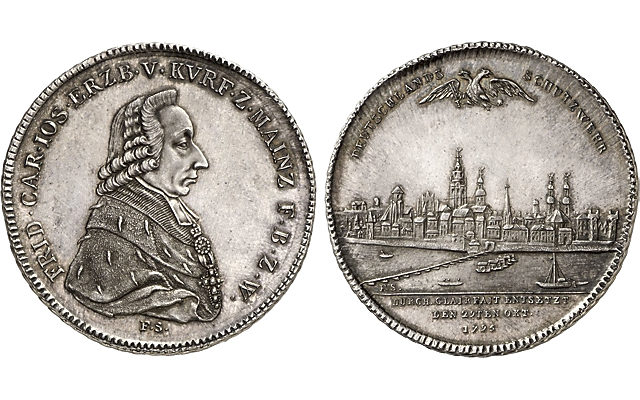 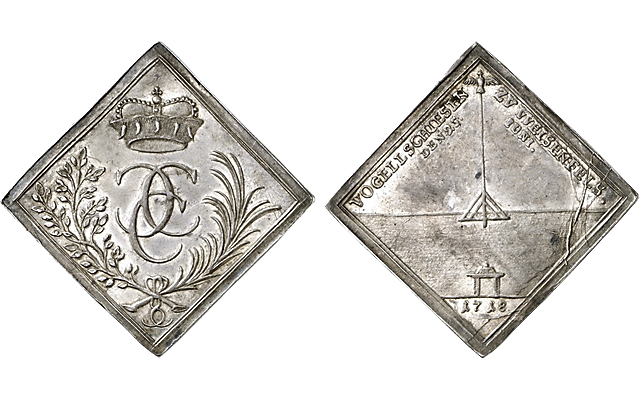 One of two silver klippes from Saxe-Weissingen in the Gorny & Mosch auction, the 1718 example sold for €12,925 ($17,919 U.S.). The coins commemorate a bird shooting festival in the city of Weissingen.

Perhaps no country has as wide an array of coin designs, types and denominations as Germany. The center of European history, German coins have been influenced and issued by numerous rulers, states and tribes.

A range of Germanic coins were offered in Gorny & Mosch’s auction No. 221 on March 12, one of three auctions the firm conducted over three days.

Highlights included a gold pattern from Nuremberg, a silver conventiontaler from Mainz and two silver klippes from Saxe-Weissengen.

The gold pattern 5-ducat coin carries the design used for a silver taler in 1698 celebrating the Treaty of Ryswick, which settled the War of the League of Augsburg, where France was pitted against the Grand Alliance of England, Spain, the Holy Roman Empire and the United Provinces.

All results include the 17.5 percent buyer’s fee, but not the value-added tax, which varies depending on buyer location.

The taler was the major silver coin of Europe for about four centuries, and numerous types were issued.

One type is the conventiontaler, which weighs about 27 grams. They appeared beginning in the middle of the 18th century and were used for several decades before a lighter coin replaced them.

A 1795 silver conventiontaler with a view of the city of Mainz — one of two pieces known for the coin issue — was offered in the sale. The coin was issued under Friedrich Karl Josef von Erthal, prince-elector and bishop of Mainz from 1774 to 1802.

Two coins from the state of Saxe-Weissenfels commemorate a bird shooting contest.

Christian, Duke of Saxe-Weissenfels, had klippes with the same weight as a thaler minted to commemorate the contest in Weissenfels. The “extremely rare” square pieces date to 1717 and 1718.

The German coins were among thousands of offerings over three days.

Auction No. 219 offered “high quality ancient coins,” with auction No. 220 featuring ancient coins and lots. The final auction, No. 221, focused on coins of medieval and modern times. A full list of prices realized can be viewed at the firm’s website, www.gmcoinart.de/online_katalog.