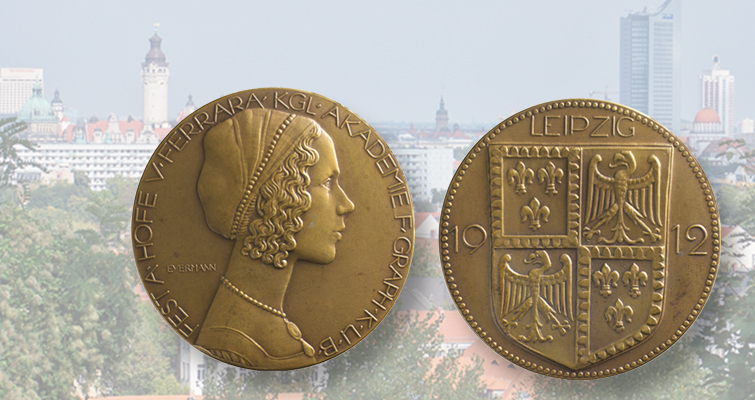 Artist Bruno Eyermann was a prolific artist in Leipzig. He created this medal while studying at the university where a collection of his works is now going on display.

A collection of medals by local artist Bruno Eyermann is being put on public display at the Leipzig University Library.

On Sept. 19, the library ceremonially unveiled the newly acquired collection of 218 Eyermann-designed medals.

Eyermann (1888 to 1961) was the central figure among Leipzig’s artistic medalists in the first half of the 20th century. Thanks to generous third-party funds, the library was able to purchase the extensive collection intact.

The 218 medals represent more than 80 percent of the known Eyermann oeuvre and cover all of his creative periods with items of especially high quality.

The collection was built over several decades by the Leipzig graphic artist and numismatist Klaus Thieme, who died in 2013. It was his wish that the Eyermann collection remain intact and be made available to a public institution for further use.

After his studies at the Leipzig Academy of Fine Arts, Eyermann started working there as a lecturer in 1919. In 1923, he started a rich production of medals as an independent artist. His work was characterized by its exceptionally firm and realistic graphic style, which, with its orientation toward Classical Modernism and New Objectivity, went on to significantly influence even the German Democratic Republic’s medal art. Another typical feature is his experiment with different formats and materials.

Eyermann seems to have always avoided coming too close to the different political systems he experienced.

An exhibit of the medals coincides with the October celebration of the 300th anniversary of the library’s coin collection, from Oct. 5, until Jan. 1, 2019. A catalog will be published at the exhibition’s opening on Oct. 4.

Ulrich Künker, managing director of the Fritz Rudolf Künker GmbH & Co. KG expressed pleasure that the auction house was able to help with the purchase: “We agree with the collector that this exceptional and extensive collection should be presented to the public in its entirety. We at the auction house and coin dealership Künker consider it both our pleasure and our task to preserve this collection of almost all Eyermann works for research as well as for the public.”