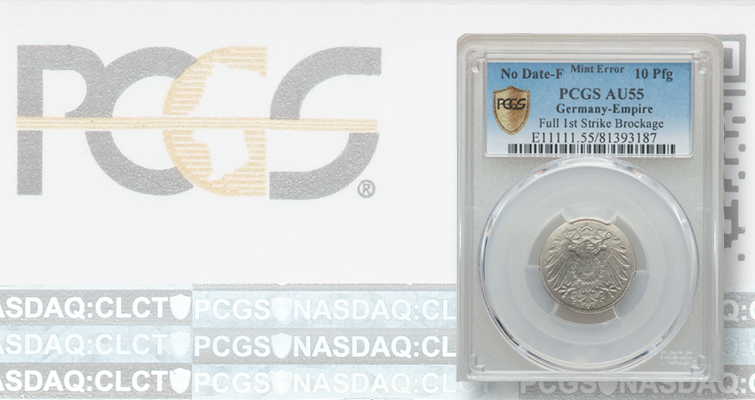 All “struck-through” errors are interesting, but maybe the most spectacular form is the brockage, occurring when the foreign object intervening between die and planchet is a previously struck coin. 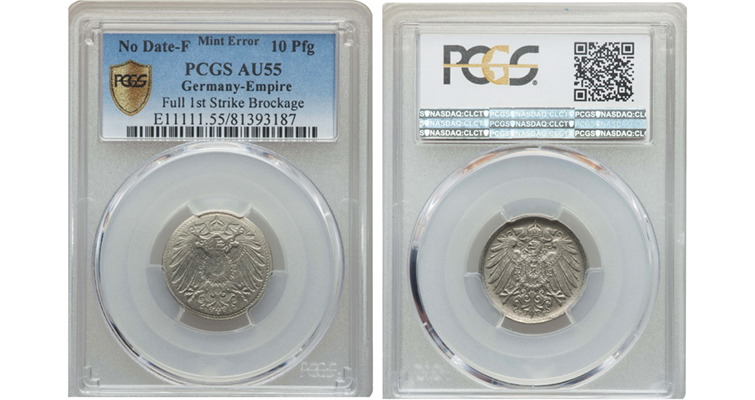 The 10-pfennig coin from the German Empire shown here is a perfect first-strike brockage, with two versions of the imperial eagle side.

A brockage error will feature two versions of one face of the coin: a normal design, either obverse or reverse, and a second version of the same design on the opposite face, though incused and a mirror image. Here’s how these fascinating errors can occur.

Normally, when a coin is struck, it is ejected by whatever feed mechanism is in use and is replaced by a new planchet to be struck as a coin. That process is repeated over and over, dozens of times a minute on a fast coining press striking coins for circulation. Sometimes, though, the ejection mechanism does not work as intended and a newly struck coin sticks to one of the dies. Incoming planchets will now be struck by the unobscured die and by the stuck coin, now an error of its own kind called a die cap.

When a planchet is fed into a press containing a die cap, the stuck coin obscures the die it covers and becomes, in effect, a surrogate die. This is where the error category gets “cool.”

Because the face of the die cap facing incoming planchets has a normal raised design, it will impart an incused and mirrored version of that design on incoming planchets. Moreover, the unobscured die is the one that formed the face of the die cap now striking new planchets. That is how brockage errors get two versions of the same die — a normal version formed by the regular die and a “backwards” version formed by the opposing die cap.

The most prized brockage errors are from the first strike of a die cap, in which the brockage side is a perfect mirror of the normal side. The 10-pfennig coin from the German Empire shown here is a perfect first-strike brockage, with two versions of the imperial eagle side.

The perfection seen on the German coin and all other brockage errors is short-lived. Since the die cap is a coin and thus made of a much softer metal than the dies, the cap is quickly flattened after a dozen or so strikes. Subsequent strikes will show an increasingly distorted and fainter brockage impression, with the design spreading out. Once the design on the die cap is obliterated, a new class of struck-through error starts — the capped die error. The first capped die errors will feature a largely featureless face on the side struck by the cap, but as the cap continues to thin, design elements from the blocked die will begin to take form on the capped-die strikes. Eventually the die cap is completely obliterated (unless it becomes detached from the die before it reaches that point).

The German 10-pfenning coin shown is of the type struck from 1890 to 1900 at several different German mints. This piece bears the F Mint mark of the Freudenstadt Mint, seen twice on either side of the eagle’s tail. The coin is dateless, since that element appears on the blocked die, as does the denomination and the inscription identifying the coin as being from the German Empire.

The coin is currently being offered by Heritage Auctions in an upcoming Weekly World Coin and Ancient Coin Auction. Bidding is expected to open around March 16 and conclude on March 23. 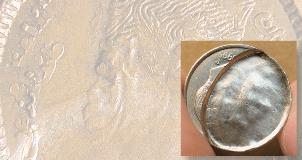 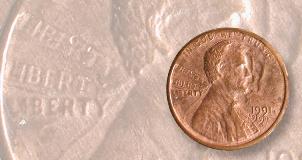