The obverse of the Washington inaugural button was struck with so much force during production that a raised image of the obverse details in reverse are evident on the reverse. 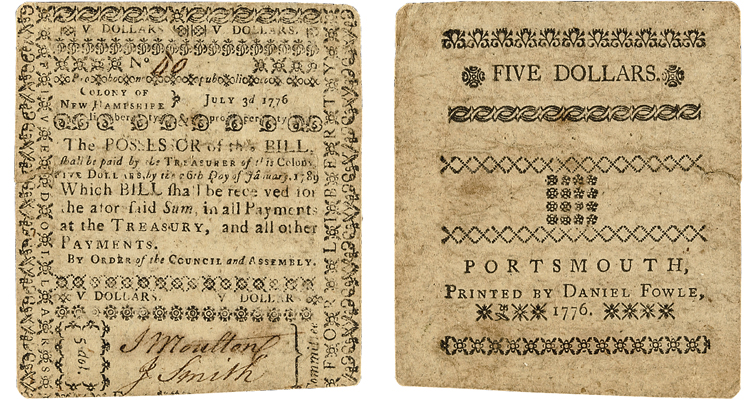 This 5-dollar note was issued by the Colony of New Hampshire on July 3, 1776, the day before the signing of the Declaratin of Independence in Philadelphia. 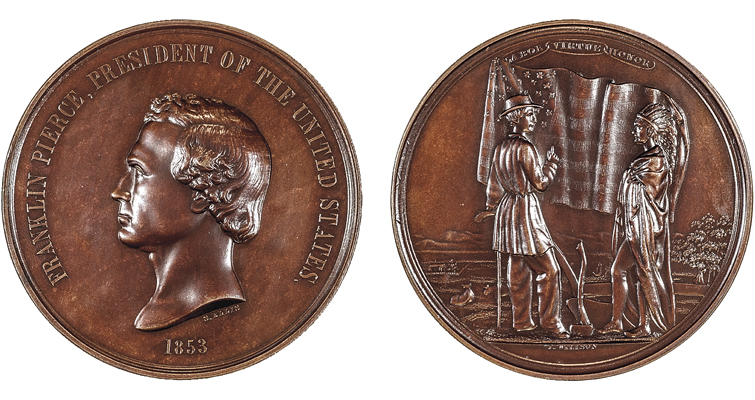 The button is identified as the Albert WI-12-C variety as listed in Record of American Uniform and Historical Buttons by Dewey Albert.

The button exhibits 63 incuse dots or indentations forming the outer border. Visible concentrically within is a second border of extremely fine denticles.

"This extraordinary button has significant details of the obverse design repeated upon the reverse, in mirror image," according to the auction lot description. "This resulted when the incuse obverse design was struck with so much force that it caused a mirror-image raised design to appear on the reverse."

Highlighting the lots offering paper money is a Colony of New Hampshire, July 3, 1776, 5-dollar note graded PCGS Very Fine 20. An edge tear is apparent on the left side of the note. The note is attributed as the Friedberg NH-175 issue as cataloged in Paper Money of the United States by Arthur L. Friedberg and Ira S. Friedberg, expanded and revised from the original work by their father, Robert Friedberg.

Carrying a pre-sale estimate of $12,000 to $16,000, the note was part of an issue authorized by the New Hampshire Colony the day before the signing of the Declaration of Independence at Philadelphia.

Printed in Portsmouth, N.H., by Daniel Fowle, the note is signed in brown ink by two Colonial officials, Josiah Moulton and John Smith.

Among the examples of medallic art being offered by Early American is an 1853 Franklin Pierce Indian Peace medal, Julian IP-32b as cataloged by R.W. Julian in Medals of the United States Mint: The First Century 1792-1892.

Struck in bronze at the Philadelphia Mint, the medal measures 76 millimeters in diameter and is 7.5 millimeters thick. The Julian IP-32b offered is the Small Date variant.

The obverse featuring Pierce's portrait was engraved by Salathiel Ellis. The reverse, engraved by Joseph Willson, is the same that first appeared on the reverse of the 1850 Millard Fillmore Indian Peace medal, Julian IP-30, and repeated on the Julian IP-31 Fillmore medal.

The reverse depicts a settler and a Native American facing one another before an American flag. Inscribed in a ribbon above are the words LABOR HONOR VIRTUE.

The dies were engraved privately outside of the Philadelphia Mint and the medals struck in New York City, according to Julian.