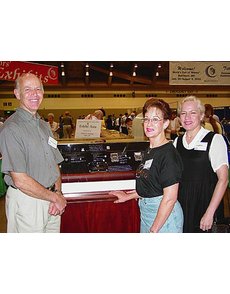 Since the George O. Walton 1913 Liberty Head 5-cent coin was declared genuine in 2003, Walton’s heirs (three of whom are shown), from left, Ryan Givens, Bette Givens and Cheryl Givens Myers, shared their uncle’s coin with the collecting community by making it available for public display at ANA conventions throughout the nation and at the ANA’s museum in Colorado Springs, Colo. 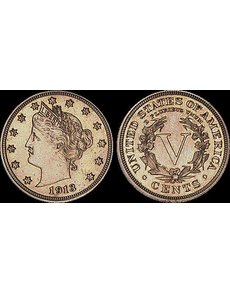 Proceeds from the April 25, 2013, auction of the Walton 1913 Liberty Head 5-cent coin have made possible a $100,000 donation to the ANA to support numismatic education.

The American Numismatic Association’s Numismatic Diploma Program will be updated and digitized thanks to a $100,000 combined donation from the heirs of collector George O. Walton, former owner of one of the five 1913 Liberty Head 5-cent coins.

“The George Walton family has been so good to the ANA for so many years, and this wonderful donation will ensure that other collectors can pursue the numismatic education that George Walton held in such high esteem,” ANA Executive Director Kimberly Kiick said.

The coin, graded Proof 63 by Professional Coin Grading Service, is housed, with the grading insert, in the same custom-made acrylic holder that Walton used when carrying the coin to exhibit at coin shows decades ago.

The coin’s one and only auction appearance was more than 50 years after Walton’s death in a car crash in North Carolina, when the coin was thought to have been lost. The coin was actually recovered from the wreck but was believed to be an altered date example; however, in 2003, it was confirmed by numismatic experts to be a genuine 1913 5-cent coin.

The fund to establish the George Walton Grant for the Support of the ANA Diploma Program comprises four donations of $25,000 each, by siblings R. Ryan Givens, Richard W. Givens, M. Bette Givens, and Cheryl Givens Myers joined by her husband, Gary Myers, in honor and memory of Walton and his sister, Melva Walton Givens.

Melva Walton Givens was the mother of the four Givens siblings.

The ANA’s numismatic educator, Rod Gillis, says the $100,000 grant will initially be employed to evaluate and revise the six correspondence courses currently offered under the Florence Schook School of Numismatics Diploma Program.

Once the entire curriculum has been updated, it will be developed into a series of online courses, Gillis said.

The Diploma Program currently consists of the following six courses:

Select courses offered at the ANA annual Summer Seminar, the spring National Money Show and summer World’s Fair of Money can be taken in place of Diploma Program courses, Gillis said. That option will continue to be available in the future, he said.

“When this is all said and done, members will have three options for completing the Diploma Program,” Gillis said. “They’ll be able to take the course online, order the textbooks and correspond through the mail, or come to Summer Seminar or to an ANA show to take the courses in a traditional classroom environment.”

Information on current pricing and requirements for the ANA Diploma Program can be found at Money.org/Diploma.

George O. Walton, a longtime collector who assembled one of the most extensive collections of United States coins, was killed March 9, 1962, on a North Carolina highway when his vehicle was struck head-on by another vehicle driven by a drunk driver. Walton, from Charlotte, N.C., was en route to the Wilson-Goldsboro Coin Club’s show at the Hotel Cherry in Wilson, N.C., where he planned to display his 1913 Liberty Head 5-cent coin.

After the collision, a 1913 Liberty Head 5-cent coin in a custom-made holder was recovered along with several other of Walton’s coins.

However, after Walton’s fatal accident, the coin in the holder was examined by the New York firm selected to auction Walton’s collection. That firm identified the coin as an altered date.

While most of Walton’s numismatic estate was dispersed at auction, the 1913 Liberty Head 5-cent coin, mistakenly deemed an altered date coin, was returned to Melva Givens. For decades, the whereabouts of the coin was unknown to the numismatic community.

Melva Givens kept the 1913 coin in a lockbox in her bedroom with coins and other numismatic items she received that did not sell at auction, according to Ryan Givens.

For the next several decades until her death in 1992, Melva Givens periodically searched to see if she could find the real coin, since stories were circulating that the piece George Walton exhibited was an altered date.

Ryan Givens assumed physical possession of the 1913 coin after his mother’s death.

Sometime later, the ANA posted a reward seeking the whereabouts of the “missing” 1913 5-cent coin, a coin ultimately determined never to have been missing at all.

Additional efforts were made from time to time to bring the “missing” Walton coin out of hiding, until finally the ANA’s World’s Fair of Money in Baltimore in 2003 brought the coin into the numismatic spotlight.

Arrangements were made to bring all of the other four 1913 Liberty Head 5-cent coins — two of which are held in museums — to the July 2003 show. Coin World’s then-editor Beth Deisher made contact with Ryan Givens, who, along with his sister Cheryl and her husband, Gary, agreed to bring the Walton coin to the show.

Six of the top numismatic experts assembled at the stroke of midnight July 29, 2003, to compare the four known 1913 Liberty Head 5-cent coins with the Walton coin. It didn’t take the experts long to compare the diagnostics on each of the coins before declaring the Walton specimen genuine.

Since the coin surfaced in 2003 and was put on public display at the ANA convention, Walton’s heirs loaned the coin to the ANA’s Edward C. Rochette Money Museum in Colorado Springs, Colo., for approximately 10 years.

“Being able to work with the Walton nickel was a privilege and a thrill,” said ANA Museum Curator Douglas Mudd. “It has, in my opinion, the best story of the five coins due to its connection with George Walton. I was amazed to learn that Mr. Walton’s coin collection was once one of the finest of its time.”

Walton’s heirs decided a few months before the April 25, 2013, CSNS Heritage auction that it was time for a new owner to experience the thrill of ownership as they had done. ¦