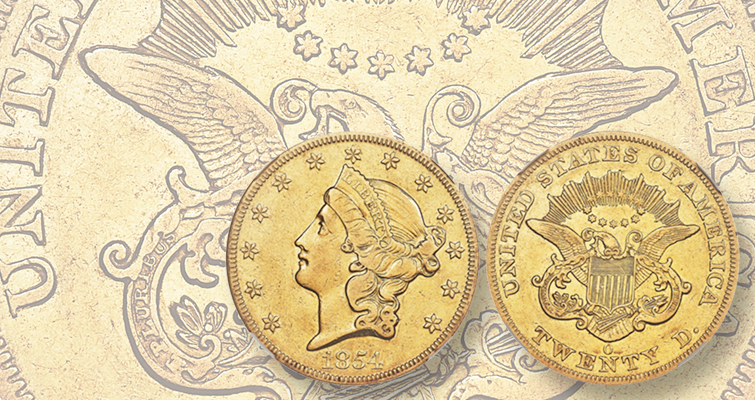 The 1854 double eagle from the New Orleans Mint is a classic rarity in any grade, with a low mintage of 3,250, of which few survive. The 1856-O Coronet double eagle has a lower mintage, at 2,250 pieces, but population reports today suggest that the two are comparable in rarity, and of the two, the 1854-O coin is rarer in high grades.

The low mintages can largely be attributed to the opening of the San Francisco Mint, which began striking double eagles in 1854. It was safer and less expensive for gold miners to have their coins struck at the San Francisco Mint than to ship their raw gold to the New Orleans facility, and as a result, gold deposits — and gold coin mintages — rapidly declined at the New Orleans Mint.

The offered example — graded Extremely Fine 45 by Numismatic Guaranty Corp. — is from what Heritage describes as “an old family collection.” Heritage reports that its upcoming auction may be this coin’s first public offering, since the firm could not trace the history of the piece to any previous public offering.

Nearly all 1854-O double eagles entered circulation since a collecting interest had not yet fully developed for Mint marked coins, and today the majority of the 24 distinct examples listed on the roster compiled by Heritage grade About Uncirculated 50 to AU-55, with the finest known being four that are each currently graded AU-58.

The offered coin is the sole EF-45 piece in the current listing of known survivors, which lists an additional 28 examples that, although they cannot be matched to the 24 in the roster, are nevertheless likely duplicates. Adding to the confusion is that, in reviewing the rosters for examples offered at Heritage auctions over the decade, it seems that several 1854-O double eagles have been upgraded. Included in these is one formerly graded EF-45 by NGC that was later upgraded to NGC AU-53.

That one — in its AU-53 grade — sold for $305,500 at Ira and Larry Goldberg’s February 2017 Pre-Long Beach auction. As the Goldbergs’ description recognized, “Ownership of one of these amazing key coins places one’s name in the hall of numismatic fame and adds a memorable quality to any advanced collection,” before challenging potential bidders with the question, “Why not add your name to the pedigree of this high grade and important rarity today?” 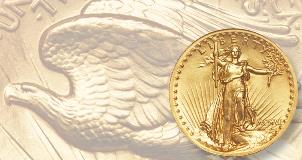 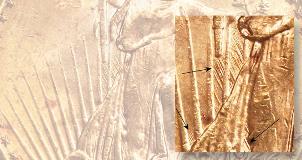