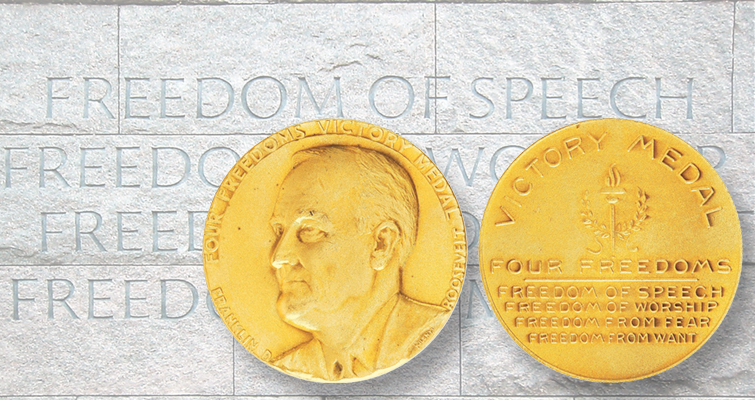 One of the pleasures of the hobby for those who can’t afford big ticket rarities is the area of tokens and medals.

To that point, on the occasion that I have to visit a coin shop, my attention invariably turns to the “junk box,” which is often a repository for unwanted, unloved numismatic items, which usually includes some such medals.

One foray into an Ohio dealer’s offerings revealed a nice reward , though I didn’t exactly know what it would turn out to be.

The prize find of my visit was a Four Freedoms gold-plated medal honoring President Franklin D. Roosevelt and his famous Jan. 26, 1941, annual address to Congress, now known as his “Four Freedoms speech.”

In the address, given more than 11 months before America’s entry into World War II, Roosevelt presented his reasons for American involvement, making the case for continued aid to Great Britain and greater production of war industries at home, according to the FDR Library. In helping Britain, President Roosevelt stated, the United States was fighting for the universal freedoms that all people should possess.

The Four Freedoms were famously presented in artwork by Norman Rockwell.

The medal is undated, but based on the “victory” reference, dates to circa 1945. The medal is among a class of pieces known as so-called dollars — actually medals rather than coins — as cataloged in So-Called Dollars by Harold E. Hibler and Charles V. Kappen.

Three versions are known, including gilt, silver and bronze versions. Each of the medals is listed as Rarity 4 meaning that between 201 and 500 examples are known in each metal.

An example of the gilt version, like the one found in the Ohio “junk box,” recently sold on eBay for $30. 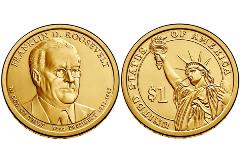 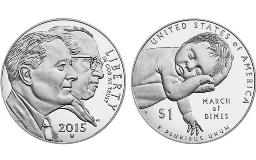