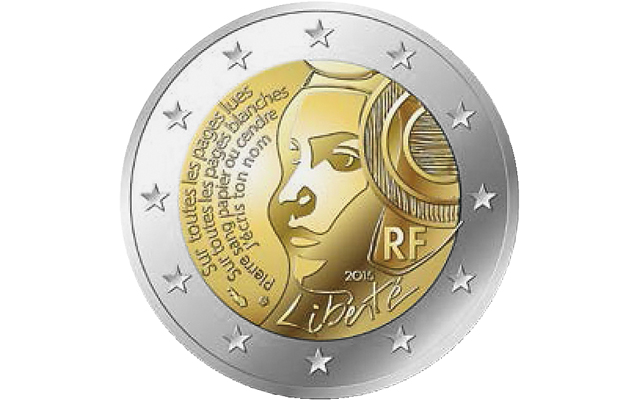 The Monnaie de Paris (the French Mint) will issue in July a circulating commemorative €2 coin celebrating the 225th anniversary of the July 14, 1790,  Fête de la Fédération (Festival of the Federation).

The theme and design of the coin were confirmed by the European Commission.

The French national holiday brings the people of France together in celebration of the Republic.

The obverse coin design shows Marianne, the symbol of the Republic, facing left in three-quarters profile and depicted in a contemporary style. Her Phrygian cap is just visible at her forehead.

At the left side of her head (the viewer's right), the French tricolor cockade (a symbolic ribbonry rosette) appears, the national colors indicated in traditional heraldic fom by use of horizontal or vertical lines in the fields, with the blank field indicating white. Below it appear the letters RF.

The year of issue is found below Marianne's chin, and she faces, at the coin's left, a stanza from the 1942 poem "Liberté" by the French poet Paul Eluard, reflecting the motto of the French Republic. The Mint marks appear alongside the poetic extract.

A total of 4 million coins are due for release early in July.