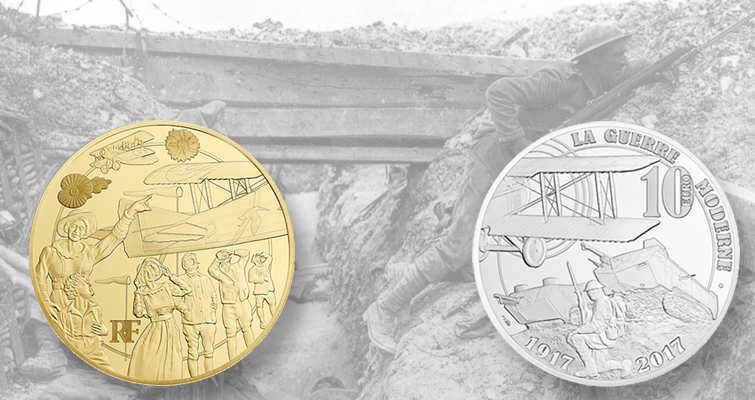 The Monnaie de Paris’ new commemorative coins mark the World War I centennial. Three 2017 Modern Warfare coins, due for release May 5, compose the fourth annual issue in a larger Great War series that began in 2014 from the French Mint.

Three 2017 Modern Warfare coins, due for release May 5, compose the fourth annual issue in a larger Great War series that began in 2014 from the French Mint.

Technological innovations in warfare were major achievements during 1917, with air and tank power playing newer and larger roles in fighting, according to the Monnaie de Paris.

The year was also notable for the addition of U.S. soldiers to the fight, when President Woodrow Wilson’s request for a declaration of war was approved by Congress.

All the Modern Warfare coins share a common design, save for the denomination indicated on the reverse.

The obverse of the coins show families coming to see planes take off, a true attraction at the time.

A plane is already in the sky between the poppy and the cornflower whereas ace fighter pilot Georges Guynemer’s SPAD biplane is about to take off.

The reverse of the coins show the plane flying over a battlefield dominated by two Saint-Chamond tanks, as 1917 battles were the first where French tanks were brought into action.

An American soldier in the foreground represents the entry of the United States to the war.

The cornflower became a symbol of the war to the French soldiers because it was often the only colorful thing that would grow in the ground that was converted to trenches, according to the Monnaie de Paris. The use of trenches was a significant development of warfare realized during World War I.

To order the silver coin, visit the distributor’s website.

The series continues into 2018 to mark the centennial of the conclusion of World War I. Coin World will report on future coins as news becomes available. 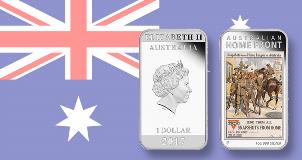