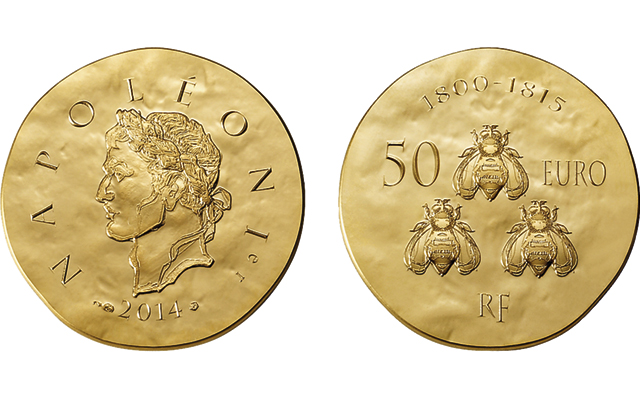 French emperor Napoleon Bonaparte is the subject of the latest coins in a program honoring 1,500 years of French rulers. The Proof gold 50-euro coin, shown, has a mintage limit of 1,500 pieces.

France’s latest issue in the series dubbed “From Clovis to the Republic” commemorates one of the most famous rulers in French history, Emperor Napoleon Bonaparte.

The program features a Proof .900 fine silver 10-euro coin and a Proof .920 fine gold 50-euro coin for each ruler honored. In total, 15 rulers (three per year) are being honored in the five-year series ending in 2015.

Both of the new coins show a profile of Napoleon I wearing a laurel wreath on the obverse.

Three imperial bees, symbols of immortality and resurrection chosen by Napoleon, appear on the reverse. The dates of Napoleon I’s reign (1800 — 1815) appear on the upper part of the coins.

The silver coin weighs 22.2 grams, measures 37 millimeters in diameter and has a mintage limit of 10,000 coins.

The gold coin weighs 8.45 grams, measures 22 millimeters in diameter and has a mintage limit of 1,500 pieces.

To order, visit the Royal Scandinavian Mint’s website or telephone the company at 877-552-6468.