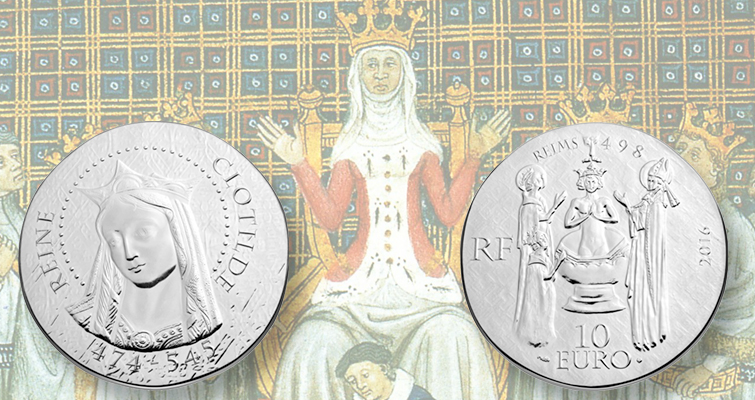 Historic women of France have their own coin series.

The Monnaie de Paris is releasing the first issues March 21 in a multiyear program to honor women across the ages.

The first three honorees, to be celebrated in 2016, are from the Middle Ages.

The series begins with Clotilde. Born circa 474, Clotilde, who died in 545, was a princess of Burgundy, daughter of Burgundian king Chilpéric II and niece of his assassin, the subsequent king, Gondebaud.

Clotilde, a fervent Catholic, was brought up in her mother’s faith. As second wife of Frankish King Clovis I, Clotilde guided her husband’s conversion to Catholicism and is venerated as a saint by the Catholic Church. At the battle of Tolbiac in 496, Clovis promised to convert on condition that he was victorious. He was, and was subsequently baptized Dec. 25, 498, in Rheims.

Two coins are being issued for each notable woman; both coins for an individual will share the same designs but will be struck in different sizes, metals and denominations.

The coins in this series are struck in a manner reflecting a historical aspect of the subject’s time, similar to a preceding series called “From Clovis to the Republic.” In that series, respective coins were struck to appear as if struck using contemporaneous coin production techniques. Instead of a hammered effect, however, the new series employs textile patterns representative of the time depicted.

The obverse features a portrait of Clotilde, presented with an aureole around her head, conforming to her status of Saint. As Queen of the Franks, she also wears a crown.

The reverse shows Clovis’ baptism, the major event recorded in French history during his reign. Clovis’ baptism date is inscribed on the reverse, and the background surface also carries a textile pattern, but differing from the obverse pattern.

Queen Mathilda and Joan of Arc are due to be honored on later 2016 releases from this series. 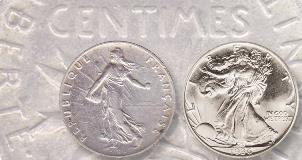 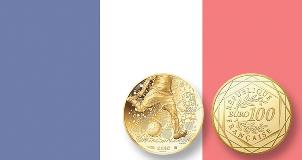 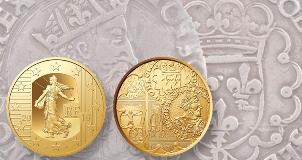