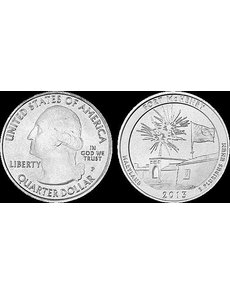 2013 Fort McHenry quarter dollar coin was officially launched Sept. 13 at a ceremony held at the historic Fort McHenry in Baltimore. 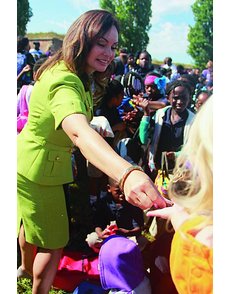 Treasurer of the United States Rosa Rios is shown handing out coins to the children at the event in the image at bottom; coin was officially launched Sept. 13 at a ceremony held at the historic Fort McHenry in Baltimore. Coin World ceremony images by Jay Bigalke.

What started out as a slightly breezy, drizzly morning at Fort McHenry National Monument and Historic Shrine quickly turned into a beautiful sunny day during the Sept. 13 launch of the new Fort McHenry quarter dollar coin, 19th in the America the Beautiful Quarters Program.

A crowd of approximately 600 people, which included 300 schoolchildren, were in attendance on the grounds of the historic fort for the ceremony.

Following musical numbers by two groups, a number of dignitaries from the government and Park Service spoke, among them Treasurer of the United States Rosa “Rosie” Gumataotao Rios. After speaking, she invited all the dignitaries to join her in the ceremonial coin pour of the Fort McHenry quarter dollar coins. Immediately following the ceremony, all of the dignitaries participated in handing out examples of the new coin to the schoolchildren in the audience.

Meanwhile, a line of collectors and coin enthusiasts queued up nearby, outside of a tent where the quarter exchange took place. M&T Bank handled the stock of quarters provided for the exchange. The exchange was for full rolls of 40 quarters for $10, with an initial limit of 10 rolls per customer. Bank officials quickly accommodated collectors looking for larger quantities of the coin after the line subsided.