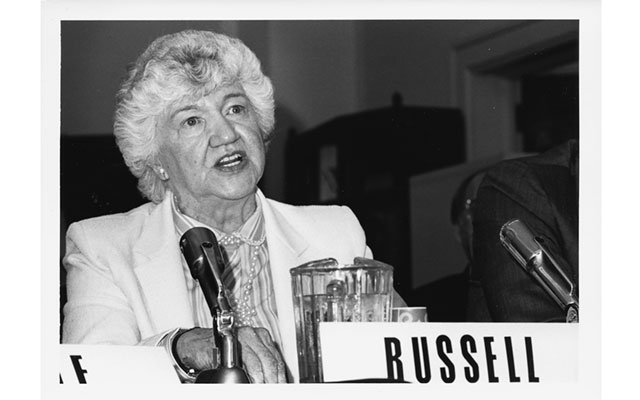 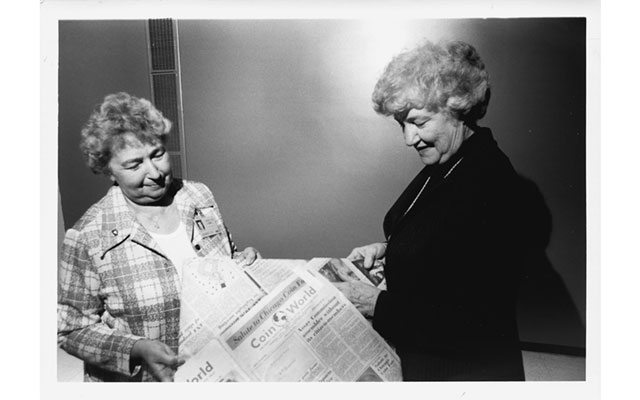 Mrs. Russell, often called the "First Lady of Numismatics," served as editor for 23 of Coin World’s first 25 years of operation, before retiring Feb. 28, 1985. She began her newspaper career in Ohio at the age of 17 at the Sidney Daily News.

In 1960, she transferred her journalism skills to Coin World, a new sister publication to the daily newspaper, and in 1962 she took over responsibility for the editorial department when she was named executive editor; later she was promoted to the editorship.

Mrs. Russell reported on the U.S. Treasury Department as well as the U.S. Mint and the Bureau of Engraving and Printing. She testified before U.S. House and Senate committees on a number of hobby-related topics.

In 1964, Mrs. Russell was appointed by President Lyndon Johnson to serve as a member of the United States Assay Commission, an honor much sought after in the coin collecting community. The panel was created nearly 200 years earlier as an annual public check to confirm that U.S. coins met with statutory requirements.

In 1970, she was named a member of the American Revolution Bicentennial Commission Coins and Medals Advisory Panel along with 14 congressmen and national figures in art, banking, and numismatics. She was named co-chairman of the panel in 1972. The panel coordinated the selection of designs for the Bicentennial quarter dollar, half dollar and dollar.

She was also a member of the advisory committee for the Research Triangle Institute’s U.S. coinage system study and a consultant to the General Services Administration numismatic program as it prepared to sell the remaining stocks of silver dollars from the Treasury Department’s once vast holdings.

Mrs. Russell received many honors from her peers in the collecting community during her decades of service to the hobby.

She was presented with numerous awards from the Numismatic Literary Guild, including its highest award, the “Clemy.”

She was also a recipient of the ANA’s Medal of Merit and the association's highest honor, the Farran Zerbe Award, and was inducted into the American Numismatic Association Hall of Fame.

Mrs. Russell was given a diploma of recognition from the Sociedad Numismatica de Mexico. She also lectured about numismatics at the Massachusetts Institute of Technology, as well as Purdue and Roosevelt Universities, and state and regional numismatic educational forums.

In the April 5, 2010, issue of Coin World, focusing on numismatic events in the 1960s, Mrs. Russell submitted her observations of those early days.

“In 1960 visionary publishing entrepreneurs in Sidney, Ohio, launched Coin World, the first weekly newspaper for coins and their devotees. After 50 years, the founders’ philosophy, ‘The Collector is King,’ is as good as gold, not only for a hobby but for a science and a profession.

“Early in 1960 I was asked to develop, from home, freelance coin features for the start-up Coin World. … I was given the heady title of historical researcher. I moved to full time, then as executive editor and editor. When the board of directors named me editor in 1967, publisher [J. Oliver] Amos told me I had filled the post, sans title, for some time.

“My first American Numismatic Association convention was in Boston in 1960.

“The first issue of Coin World was timed appropriately to appear during National Coin Week in April 1960.

“Coin clubs organized at warp speed — 1,832 reporting to the Coin World Club Center by 1967. The number of coin dealers reached 5,000, according to reports. Coin columns proliferated in daily newspapers across the country — from the venerable The New York Times to obscure weeklies. One authority called Coin World his weekly gratification.”

A private graveside service is set for Mrs. Russell on Jan. 29. A memorial service is planned at the First Presbyterian Church in Sidney, Ohio, at a date yet to be determined.

She is survived by daughters Jenny (Michael) Barhorst and Susan Russell; two grandchildren and three great-grandchildren.

Contributions in Mrs. Russell’s memory made be made to:

??The Community Foundation of Shelby County.

Guestbook condolences and expressions of sympathy may be made to the Russell family at the website of the Cromes Funeral Home.