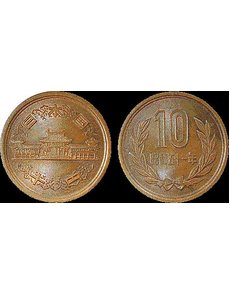 The 1976 Japanese 10-yen coin shown is one of 13 such coins the author found while searching through 50 hand-wrapped rolls that were supposed to contain United States quarter dollars.

Searching through rolls of U.S. quarter dollars is always an exciting endeavor. Naturally, I expect to find coins that exhibit the many designs used on the Washington quarter dollar since their first release in 1932.

Barring a few occasional modifications, the earlier design, which included a bust of President George Washington on the obverse and an eagle with its wings spread on the reverse, was used from 1932 through 1998.

We are now in the midst of the America the Beautiful series of quarter dollars that feature images based upon our national parks and historic sites. First issued in 2010 and hopefully continuing until 2021, I can expect to see even more variation in the coins as I search through rolls of quarter dollars in the future.

What makes this hobby so much fun is that, while so much variety can be expected while searching through rolls, the unexpected can still happen, and so it is with my finds for this month.

As I searched through 50 rolls of hand-wrapped quarter dollars, I discovered not one, but 13 coins like the one pictured here. I recognized them as 10-yen coins of Japan. The obverse of each coin depicts the Phoenix Hall of Byodo-in, a Buddhist temple in Uji, Kyoto prefecture. Also seen is the kanji for “Japan” and “ten yen.”

The reverse shows the numerals “10” and the date of issue in kanji surrounded by an evergreen wreath composed of bay laurel leaves. Kanji are the adopted Chinese characters that are used in the modern Japanese writing system.

Go to askaboutcoins.com and check the links on the right side of the page for one that will help you to date your Japanese coins.