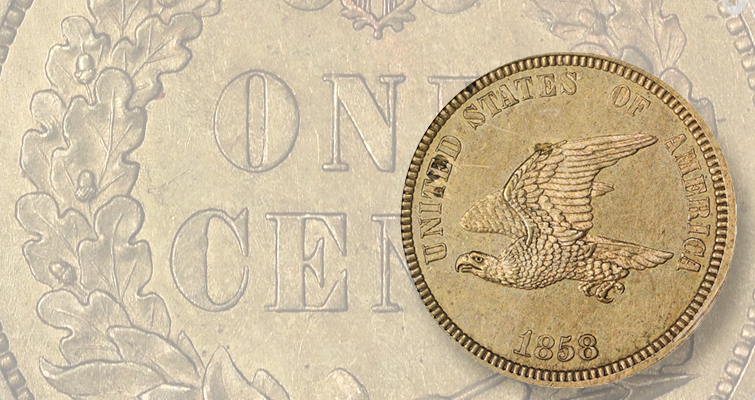 This Proof 62 1858 Flying Eagle cent pattern features a scrawny eagle on the obverse and an ornamental shield on the reverse. It sold for $2,115 on March 9. 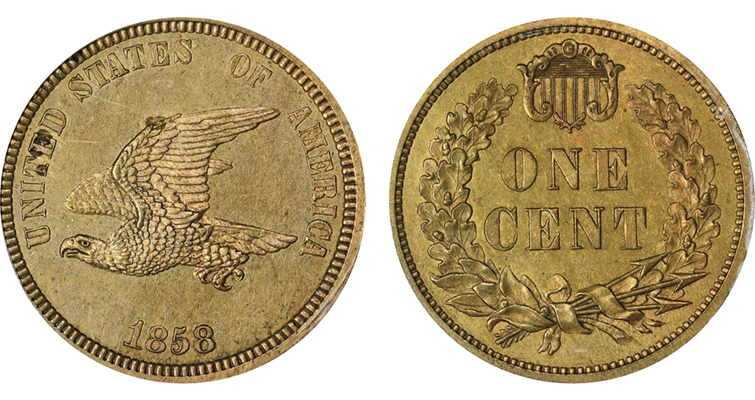 A look at both sides of the Proof 62 1858 Flying Eagle cent pattern features a scrawny eagle on the obverse and an ornamental shield on the reverse.

Another unusual — and rather awkward — variant of the Flying Eagle design depicts a scrawny eagle with aggressive open talons, as seen on this 1858 Small Eagle pattern cent. The reverse design is noteworthy for the ornamental shield that appears at the top between the tips of the two branches forming the wreath, which appears to be the work of Anthony C. Paquet, assistant engraver of the U.S. Mint. Paquet is best-known to collectors for his reverse design used on some 1861 Coronet double eagles with distinctive lettering featuring taller letters with prominent serifs. He joined the U.S. Mint in 1857 and would stay until 1864.

The copper-nickel pattern offered, Judd 204, is relatively common, with as many as 200 examples struck. The high mintage is because examples were marketed directly to collectors and a large percentage survive today.

This Proof 62 example is an affordable representative of obverse and reverse designs that are familiar but different in execution from what collectors expect from a Flying Eagle cent. It sold for $2,115.