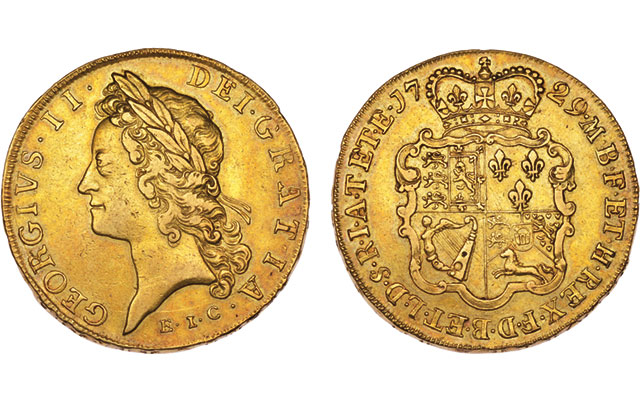 The source of the gold is identified by the letters ‘E.I.C.’ on the obverse of the coin, below the king’s head.  In identifying the metal's source, the coin reflects the heritage of guinea coins.

Guinea coins were first issued in 1662, when the recently restored Charles II decreed that the Mint would abandon hand-hammered coinage in favor of money produced in screw presses. The presses could produce symmetrical coins with milled edges to deter clipping. Gold for this new issue came to England in ships of the Africa Company from Guinea in West Africa, and the new coins soon became known as guineas.

The practice of acknowledging the source of the gold continued into the 18th century, even after the EIC coins; some guineas were marked with the word LIMA to reflect their gold's source in British-captured Spanish treasure ships that had sailed from the city of Lima in Peru.

The East India Company originally received its Royal Charter from Elizabeth I in 1600.

The exact origin of the gold obtained by the company is unclear, although it may have come from Japan, according to Will Bennett, a representative for the auction firm.

Treasury records indicate that on Nov. 4, 1729, an EIC representative wrote to the Lords of the Treasury requesting the preparation of dies with the capital letters ‘E.I.C’ under the King’s head to distinguish the coins minted from its gold “as hath been granted to the Royal African, the South Sea Company and others.”

The request was granted, and many of the gold coins from early in Charles II’s reign feature the EIC mark, according to Peter Seaby in The Story of English Coinage.

Three denominations of gold coins feature the EIC mark, but 5-guinea coins with the mark (then an enormous sum, Bennet said) were issued only in 1729.

The auction house did not provide a grade for the coin.