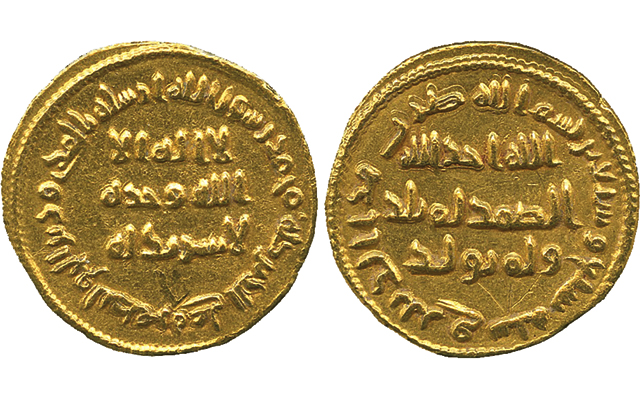 Graham Byfield, Islamic Coin specialist at the auction firm, said via a press release that the Umayyad dinar “is the most desirable coin ever struck, guaranteeing the importance of any Islamic coin collection.”

Byfield told Coin World in an interview that, prior to the A.H. 77 dinar, all Arab coins were derivative of previous cultures. Arab Sasanian coins simply added a small line of text to an existing Sasanian coin design and so-called Arab Byzantine coins were based on standard Byzantine coins, with the cross made to look like a pillar instead, and other variations.

The dinar is the first to have a design entirely made from text, representing a move away from including images, which are forbidden in Islam. Byfield said it is also the first coin to bear the full Islamic statement of faith, the Shahada, which translates to “There is no god but God, Mohammed is the messenger of God.”

“The coin itself is not considered sacred but as a piece of social history it is important,” Byfield told Coin World.

The sale also includes the Arab world section from the Åke Lindén collection, which features a near comprehensive listing of coins from the Arab nations for 1850 to 1950.

“Seldom available, the collection of modern Arab coinage is without question the best to come to the market in many years,” according to the firm.

The auction is scheduled for Aug. 6 at the Chartered Institute of Public Finance and Accountancy in London.