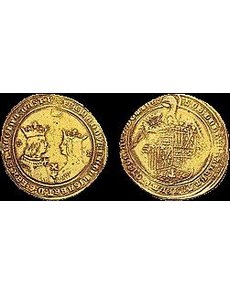 The star of the June 26 auction in Madrid of the first publicly available pieces from the Archer Huntington Collection is this undated (circa late 15th century/early 16th century) gold 10-excelente coin struck at the Segovia Mint, the only one in private hands.

Material from the Archer Huntington Collection of Hispanic coins will appear at public auction for the first time June 26 in Madrid.

The 37,895-piece collection, owned by the Hispanic Society of America, was sold March 8 by Sotheby’s in a one-lot, sealed-bid sale.

Officials for Sotheby’s would not identify the buyer for the collection. Rumors that the collection was secured by a private dealer/hobby consortium were verified by events since the sale, beginning with the mid-June posting of lot listings for the June 26 auction by Jesus Vico, a numismatic auction firm in Madrid.

The auction house is one of four members of an anonymous partnership that won the Huntington Collection bid, said Jesus Vico Jr.

Vico said the family-owned auction house is the only Spanish firm among the group. Vico said his firm is selling its portion of the collection independent of the other partners.

The Vico firm is selling 1,004 coins during a June 26 auction that features coins from Spanish mints such as Seville and Madrid. Many of the coins have opening bids of less than $100 (U.S. equivalent) in individual lots.

Vico confirmed his firm’s plans for two additional auctions of Huntington Collection material, in October and November, with the type of coins to be determined, but likely Iberian, medieval and Latin American coins. The firm tentatively expects to offer as many as 1,500 coins in each auction, “but we don’t know at the moment. We will have some very special coins in each one,” Vico told Coin World.

The Segovia Mint issued 50-, 20- and 10-excelente coins during the reign of Ferdinand and Isabella.

A unique 50-excelente piece is the greatest prize in the Huntington Collection, according to multiple sources. The 15th-century massive gold coin measures 66 millimeters wide and 176 grams in weight. Sotheby’s catalog called it “arguably the most important and valuable European coin in existence.”

It is not being offered in this sale, and its disposition is unknown at this time. ¦