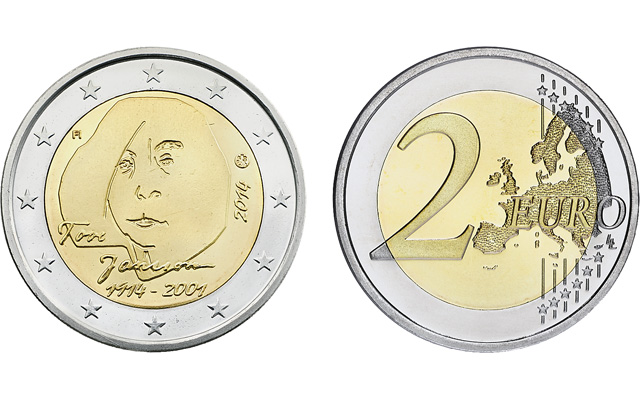 The coin is scheduled to be released June 16, the Mint of Finland announced May 16.

A total of 1.5 million examples of Finland’s first 2-euro commemorative coin of 2014 are being issued.

The issue of a circulating coin, following the release of two silver collector coins (in 2004 and 2014), “puts Tove Jansson’s position as a respected and acknowledged artist and author beyond a shadow of a doubt. This is also indicated by the fact that she is being so diversely and widely celebrated during the Tove 100 jubilee year,” says Sophia Jansson, Tove Jansson’s niece and the artistic director of Moomin Characters.

Finland is celebrating the woman who is one of its most famous authors with a year-long celebration in Finland and abroad.

Jansson is best remembered for her independent and stubborn Moomin characters with their complex and quite inimitable world view.

The obverse (national side) of the 2-euro coin was designed by Jari Lepistö, and is based on Jansson’s self-portrait. The reverse is the standard map design used for circulating 2-euro coins throughout the eurozone, the 18 countries that issue euro coins.

A total of 11,000 of the coins will be issued in Proof and sold for a premium price. Pre-orders begin on May 26 through the Mint of Finland online shop, found at the Mint’s website. An individual Proof coinin a case is priced at 24 euros.

Uncirculated coins are available in two collector options: a purse with 10 examples retails for 41 euros, and a 25-count roll is being sold for 90 euros.

Finland plans to release the full quota of two Finnish 2-euro commemorative coins in 2014, but the theme for the other coin has not been disclosed.