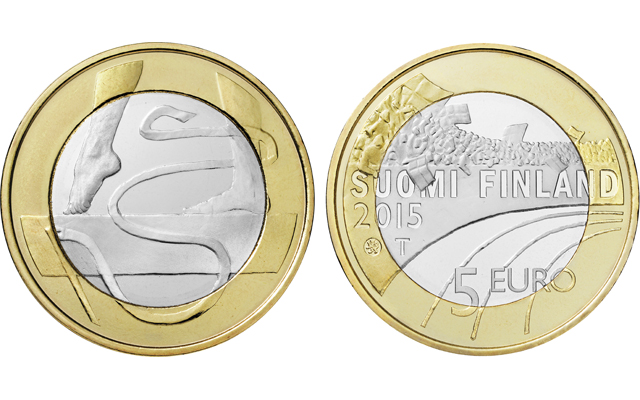 Finland will begin a series of noncirculating commemorative ringed bimetallic €5 coins with an example honoring gymnastics. The coin is being released July 6 but online sales open on June 24.

The Mint of Finland is launching another series of noncirculating €5 collector coins with a series showcasing sports.

The nine-coin Sports Coins program schedules a July 6 release of the first design, celebrating gymnastics, and continues into 2016. Online presales of the coins begin June 24.

The obverse of the Gymnastics coin features key elements of the sport, such as a beam, the legs of a gymnast and a gymnastic ribbon. The coin's reverse depicts the curve of an athletics stadium, complete with tracks and cheering crowds. All coins in the series will share the same reverse, according to the Mint of Finland.

Designs for basketball, figure skating and volleyball are also are slated for release in 2015. Sports celebrated in 2016 releases will be ice hockey, skiing, football (soccer), athletics and ski jumping.

“The Finnish people love sports, and sport has played a major role in building Finnish national consciousness and cohesion — and still does. We have common experiences of this from the nation’s early history and recent times alike, at times of success and defeat. The sports coins will be a popular collector’s item that will also interest the general public, in other words, all sports-loving Finns,” says Mint of Finland CEO Paul Gustafsson, in a press release.

The release of the Gymnastics coins was scheduled to precede the international Gymnaestrada gymnastics event in Helsinki from July 12 to 18.

The number of amateur gymnasts in Finland is estimated at 600,000, of which about 150,000 are active in sports clubs, according to the Mint of Finland.

The Mint of Finland is debuting new packaging beginning with the Sports coin series.

Proof coins retail for €22 each.

Beginning with the Sport series, the Uncirculated coins are being offered in paper coin envelopes, and are priced at €10 each.

Sports coins can also be purchased for their face value in cardboard boxes of 10 coins, costing €50.