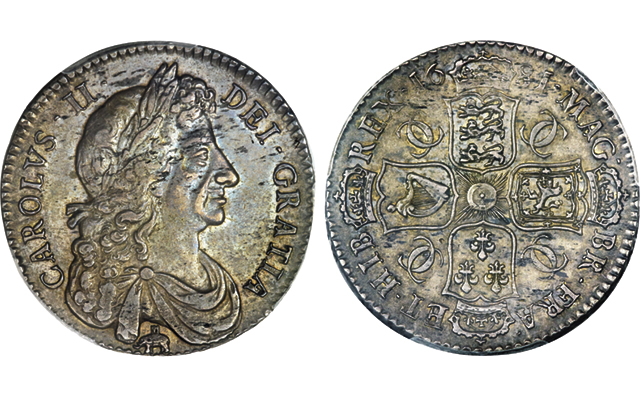 The finest known 1681 silver half crown of Charles II of the Elephant & Castle type realized $35,250 in Heritage Auctions’ Sept. 3 to 5 sale.

What is characterized as the “finest known” 1681 Elephant & Castle silver half crown of Charles II realized $35,250, including the 17.5 percent buyer’s fee, during Heritage Auction’s Sept. 3 to 5 sale.

The coin, which is graded About Uncirculated 55 by Professional Coin Grading Service, is one of “no more than 20 examples” to exist in all grades, according to the auction house.

The coin type is so named for the tiny elephant and castle mark below the king’s bust on the obverse. The mark initially omitted the castle but later was changed to incorporate the castle.

The mark, regardless of its composition, was used on select silver and gold coins to indicate that the coins were struck from metal mined from the Gambia River in Africa by the mercantile Royal African Company. Far more gold coins than silver coins were minted with the marks.

The example in the auction has a provenance that dates to 1884 and includes the Hyman Montagu Collection and the John G. Murdoch Collection.