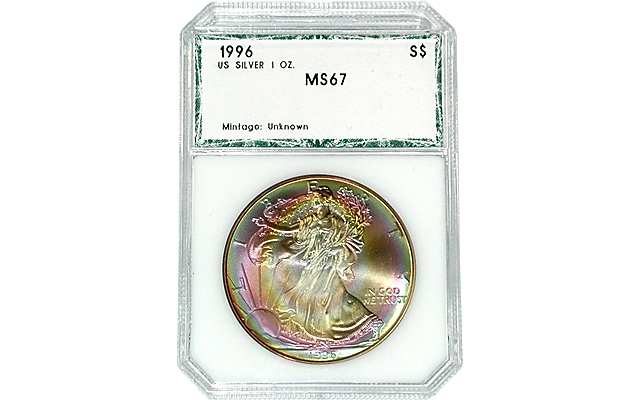 Rainbow-toned American Eagle silver 1-ounce bullion coins have launched the author on a quest to build a consecutive set of PCI-graded and encapsulated silver American Eagles.

All toning is a chemical reaction from when metals come into contact with materials or environments that spawn vibrant hues. Years ago such toning was shunned because hobbyists preferred blast-white coins. Now it is in demand.

Morgan dollar enthusiasts typically pay hundreds of dollars over retail for a common Mint State 64 coin, such as an 1885-O Morgan dollar, when it displays “monster toning” — usually half-circle colors that resemble rainbows. Most coins tone on one side, although two-sided toning also is fairly common.

I happen to love rainbow-toned coins, especially on large coins like Morgan dollars. But my budget has limited how many I have been able to purchase or successfully slab.

Recently I discovered older Hallmark- and PCI-encapsulated coins whose labels sometimes state “100% White,” but whose pastel patinas are lovelier than almost any toning on any other denomination.

I bought my first toned PCI American Eagle silver coins in an auction. I paid about $75 for them.

I sent a dozen to Professional Coin Grading Service, all of which were graded and encapsulated between MS-67 and MS-69.

When I showed the best of those lots to my local coin dealer, Scott Nichols, he gasped at the beauty and then called his dealer son Kirk to the counter to view the circular artistry of the patina.

Imagine that! You buy a rainbow-toned beauty and show it to someone who has viewed hundreds of thousands of coins throughout his life. And he beholds the coin and gasps. Would that not hook you, too? It did me.

I am in the process of completing a consecutive set of PCI-graded and encapsulated silver American Eagles. Right now I have one or several of each year from 1986 through 2001, missing the 2002 to 2003 coins.

On eBay, collectors can find any number of PCI-encapsulated silver American Eagles with intense target toning.

Also, do not overpay for these pastel splendors. Some eBay sellers are asking $1,000-plus for a PCGS crossed-over American Eagle. That’s too much. You should be able to pick up a similar one at auction or a coin show for about $100. Key dates and varieties, of course, will run more.

Avoid any PCI-encapsulated silver American Eagles that contain blotches in the toning. The key is to get seamless circular toning with no spots, blotches or fingerprints.